The guys at The Stat Pack posted their weekly chats today, and this might be one of the funnier things I've seen:

Jules(TheStatPack): What do you think of the Rays plans for a new waterfront stadium?

Rob Neyer: I think I need to dig up the letter Vince Naimoli once sent me, arguing that Tropicana Field is the best ballpark in all the land. 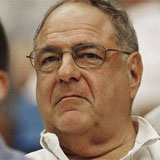 I'd have to assume this would be while Naimoli was owner -- and I'm also going to assume that Naimoli should've spent a lot less time reading Rob Neyer and a lot more time noticing that even his general manager knew his plans would fail, but didn't have enough tenure to speak up.