Share All sharing options for: Proving Time for Papa Positivity

After going a combined 127-197 in his first two seasons as the Rays head coach, many have questioned whether Joe Maddon is the right person to navigate this team out of the perennial cellar of the AL East. He led the team to the worst record in baseball for 2 consecutive seasons, and last year's pitching staff had a AL worse ERA of 5.53.

You would think that after 2 awful seasons as manager, the Rays would pull the plug; until you look closer and realize that he hasn't even started to manage. 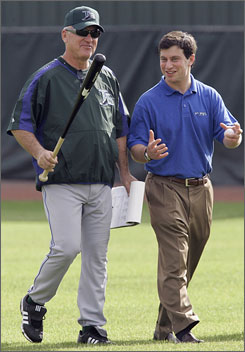 Joe Maddon has been paid like a head coach for the last two seasons, but in reality he has been nothing more than a lab rat. Like a lab rat would test pH balances and the effects of adding iodine, Maddon would test Shawn Camp with runners in scoring position and seeing whether it is actually possible for Dioner Navarro to bunt for a hit. (It's not!) He has been publicly criticized for his mismanagement of the bullpen, but he was actually just performing your every day Litmus test.

We have seen Papa Joe try some new things from a managerial perspective, such as the infamous "Pronk Shift." In the 2nd half of the 2007 season, the team made some moves to erect a "make-shift" bullpen, which was a upgrade from our "non-existent" bullpen. Since, those changes were made in the bullpen the team played with a renewed energy, and the coach started acting like one. Instead of re-treading Brian Stokes to blow the game, he had the option of handing the ball off to Dan Wheeler in the 8th.

Another aspect of Maddon's managerial approach to the game that has been questioned is his constant positivity. Going from Piniella's brash player management to Maddon's upbeat philosophy is comparable to going to a Metallica concert one night and a Maya Angelou poetry reading the next. With a team as young as the Rays, it's the positivity that may be just what the doctor ordered. In 2007, we saw many different players have career years: Carlos Pena, B.J. Upton, Brendan Harris, James Shields, and Al Reyes. Pena, the biggest surprise, has been very vocal about the effect's of playing in such a positive atmosphere.

One player who didn't seem to buy into Pastor Maddon's prophecy was Delmon Young. He has gone on record saying he was going to bolt as soon as his contract was up, and got into a vocal argument with Maddon late in the '07 season. Delmon has since been traded to the Twins as we all know in a deal centered around starting pitcher Matt Garza. Garza has since elaborated on his excitement to come and play for this Rays team, which is quite the opposite of Delmon's sentiment.

Is it strange that the only player to have beef with Maddon was shipped out? Not really, Maddon has built a very strong relationship with Andrew Friedman, which was rewarded when Maddon's option was picked up. They even flew out together to sell this Rays team on Troy Percival, and that seemed to work out pretty well. Their relationship is a major reason to believe in the whole "lab rat" theory, knowing which fringe players were keepers has sure made Friedman's job much easier.

In the end, we are all excited for the 2008 season, as it will be a chance for Maddon to finally do some actual managing. It's time for Papa Positivity to step out of the laboratory and into the dugout, because all eyes will be on him this time around.