Share All sharing options for: Steve Phillips Is An Idiot (Part Two)

Check out his meaningless bashing after the jump. 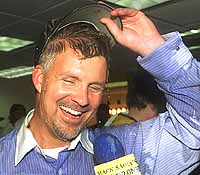 You may remember my post against Phillips a month or so ago, well...he ran his mouth, again. During today's ESPN broadcast the commentating team talked about the AL East, and Phillips said something quite condemning concerning his knowledge of the Minor Leagues:

The Devil Rays as a system are really lacking pitching.

Huh? In the words of Tom Jackson, "Are you retarded?"

I'm not even going to blast him and name names, I'll let the experts do the work for me:

Not so much on the pitching side yet we have five of the top 150 prospects overall and they just happen to make a living off throwing a baseball. That's without mentioning Hellickson, Hayes, Cobb, Walker, ect. or (hopefully) soon David Price.

So that could've wrapped up the post, but na, I decided to take this one step further, you want to know how big of a failure that man is? This sums it up well, but please don't forget, Jason Bay was a late bloomer! Yep that same Jason Bay who put up OPS over 800 all but twice in his minor league career.