Share All sharing options for: Brian Anderson Throws for Rays

With scouts in attendance from the Rockies, Philadelphia Phillies, Indians and Tampa Bay Rays, 34-year-old Brian Anderson was pleasantly surprised by his effective 60-pitch side session on Friday. Anderson hadn't thrown a meaningful pitch in 17 months, but his surgically repaired elbow responded well and felt great Saturday.

Anderson has a career .794 OPS against lefty hitters, and in his career has pitched for the Angels, Diamondbacks, and Royals. In his last action in 2005 Anderson boasted an amazing split against righties and lefties: 1.044 OPS against righties, .195 versus lefties. I really can't see the Rays giving him anything but a minor league deal - at best. 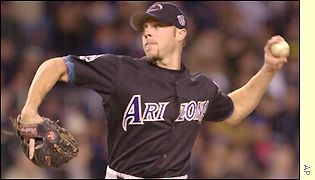