A sneak peak, courtesy of SI:

A nonconformist? Maddon has little regard for baseball's managerial book, and he has the bases-loaded intentional walk (the one he had issued to the Rangers' Josh Hamilton in August was the first in the AL in 107 years), four-man outfields (he sometimes uses the softball alignment against sluggers like the Red Sox' David Ortiz) and unique hitting tips (he told his switch-hitters to bat righthanded against Yankees righty Mike Mussina) to prove it. "I get so annoyed when you get around a lot of baseball people and basically all they can do is regurgitate previous thoughts," Maddon says. "They don't think of anything original. Tell me a better way." 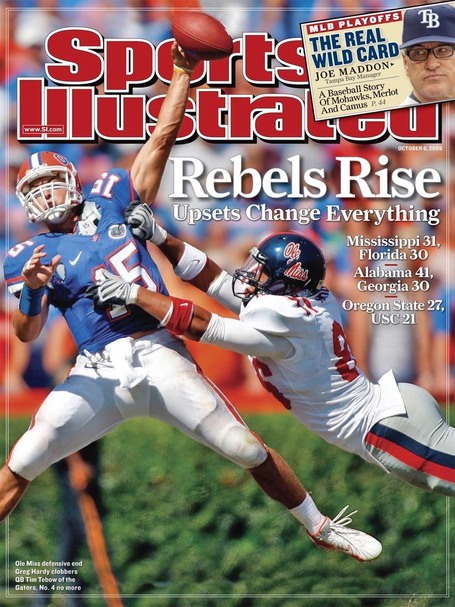 One more excerpt for the road:

Maddon was hired by the new front-office triumvirate-president Matt Silverman, executive vice president of baseball operations Andrew Friedman and senior VP of baseball ops Gerry Hunsicker-to be the polar opposite of Piniella, someone with the patience and willingness to teach young players. Maddon certainly had that; he spent 31 years in the Angels organization as, among other things, a player, scout, roving hitting instructor, minor league manager and major league bench coach. He also impressed the Tampa Bay brass as open-minded and progressive, someone who would embrace the 31-year-old Friedman's devotion to complex statistical analysis. Even in the 21st century, finding a dugout boss who thinks that way isn't easy. "There are some pretty prominent managers who are closed-minded," says Hunsicker, the Astros' G.M. from 1996 through 2004. "I won't mention any names, and some of them are among my better friends, but I just don't agree with that narrow-mindedness. I think we all have to change with the times."

It's a fascinating read. I do strongly encourage everyone to find a copy of fthe article somehow.