Share All sharing options for: Recap: 1-0, Longoria is a beast. 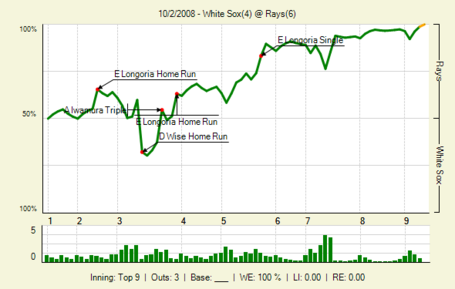 Now, Shields may not have had the prettiest statline for the playoffs, but he had a typical effective James Shields start. Gave up the big home run early, but his changeup was dominant with two strikes as always. He gave 6.1 solid innings and you can't argue with that in the playoffs.

Balfour has one dominant pitch. The kind of pitch that you can throw to get out of a bases loaded 1 out situation. And telling Cabrera to sit down was awesome.

Howell's fastball is deadly to righties, looks like a future relief ace if he's not there already.

Wheeler was a flyball reliever that scares me. But a 3 run lead meant that his antics couldn't hurt us too bad,.

Carl Crawford and BJ Upton looked like hackers early, but both calmed down and became contributers. Hopefully Pena can play tomorrow, I'd almost hit Longo 3rd and Pena 4th  since Ozzie looked to be walk-happy with Evan in the end.