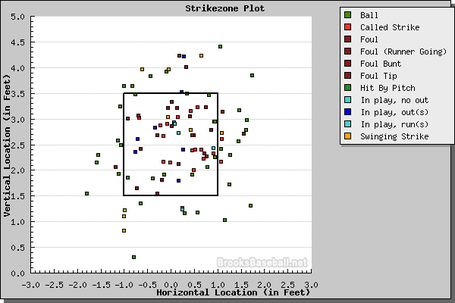 Pitches 6 and 4 were either fouls or swinging strikes with pitch 1 being a favorable called strike. Where did pitches 5 and 9 miss? Well, I don't know, actually. Even the Fox Track thing, which I don't entirely trust, had them within the strike zone. Essentially Kazmir struck Burrell out, twice. Instead Burrell walked, Kazmir was lifted, and Grant Balfour had to work his way out of a jam.

I'm not going to say that if we had robot strike callers last night the outcome would've been different. For one, knowing MLB, the robots would've short circuited in the rain, and two, using results based analysis we know the game is tied. However I question the judgment of anyone who places tradition or anything else over getting calls like these right in every game, and especially in the biggest games.

It hasn't changed the outcome of the series, but when the gold standard of umpires are getting this many calls wrong, it might time to implement instant replay and robots.