The Bossman had high expectations going into this season, people thought he would enter the 30/30 club, and while he didn't quite live up to the hype this year, he improved many aspects of his game, and better adjusted himself to the CF position, putting in a top 10 CF season and putting his name along with the game's brightest futures.

B.J. Upton hit .278/.383/.401, the first thing that jumps out is the massive improvement in his walking ability, thanks to leading the league in O-Swing% at 14.96%, he also made contact 65% of the time when he did swing at balls out of the zone, and made contact 80% of the time period, if he can do this year in and year out, he'll probably be a perennial top 5-10 player in terms of OBP and patience.

The second thing that jumps out at you is the massive decrease in power, part of this is due to the torn labrum he suffered against the Baltimore Orioles early in the year, and partly to a massive decrease in his HR/FB, by about 12%. His hitting for average was also a bit flukey with a .351 BABIP with only an 18.9% LD%, suggesting he is due for a bit of regression.

In the playoffs however, Upton completely changed, his slugging abilities improved to the tune of a line of .288/.333/.652, with 7 HRs in 72 PAs. Furthermore, he increased his hitting for average with his BABIP dipping to .279 even with a LD% increase of 2%, suggesting he was very unlucky. So which is the real B.J. Upton? I'd tend to believe somewhere in the middle, and after his shoulder heals he'll add the pitch recognition he added from 2008 to the power and Line Drive ability he showed in the Postseason and in 2007, I'll be bold and predict a line of .290/.400/.530 with around 25-30 HRs from him next year.

Upton is still a work in progress with the glove, but he excited flashing great range in  the field, even though he only saved 3 runs above replacement, with his speeed and range if he learns to take better routes he could easily be up with Beltran, Sizemore, and Granderson in terms of total value next year, which should make RJ a happy camper. 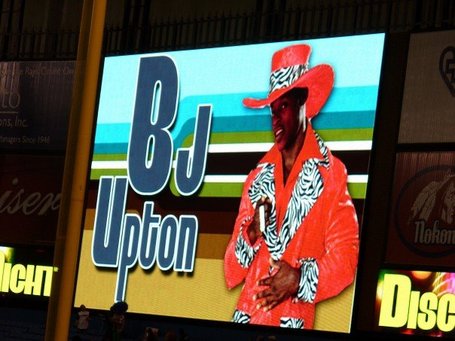