Acquired last Winter for Delmon Young and change along with Barty and Eduardo Morlan, Garza pitched his first full season as a ray and pitched relatively well. Blessed with great stuff, Garza made strides in terms in terms of control and took a small step back with his strikeout ability and forcing groundballs.

His tRA sat at 4.32, or 111+, a slight decrease from last year. One worrisome note about Garza is how his Swing Swtrikes have gone down to a career low. His fastball usage jumped this year, up to 72%, coming in a close second in terms of most used pitch was was his slider at 13%, followed by his changeup, than his Curveball. As such, his fastball velocity was down about a MPH and his secondary pitch velo was up on average by about 2 MPH each.

For next year, I would expect him to regress in the batted ball field, while progressing in striking out and continued development on his control, and the control of his emotions on the mound. A FIP around 3.90 isn't out of the question, and a tRA+ around 120+ sounds reasonable, making him a servicable #2 starter, and yet again a key cog in the stacked pitching rotation. 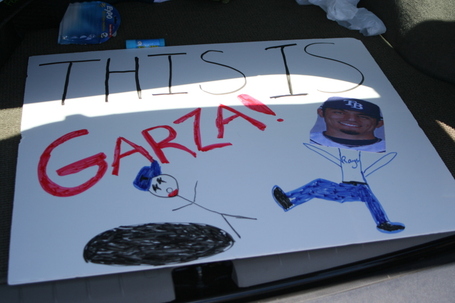