Come Off The Ledge

Share All sharing options for: Come Off The Ledge

From overconfidence to depression, thus is the emotional turbulence suffered by Ray fans over the past two weeks. I tend to avoid being temperamental, hence why you don't see cursing or tantrums on random items, instead I would like to think that I always have the big picture in mind. You didn't see a ton of Evan outrage from me because I felt little. Scott Kazmir's injury concerns me, but probably not as much as David Price's injury, after all, if nothing else the Rays are guaranteeing that if Kazmir's elbow does blow it will come after we cash him in, that's just smart business. 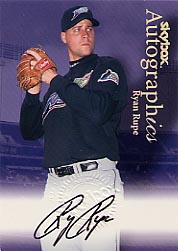 Ryan Rupe, just another of the young arms rushed by the Rays.

Some would accuse me of caring more about the business aspect than winning; however I can guarantee you that's hardly the case. Jeff Niemann's demotion caused a firestorm, but looking at the move logically it makes sense. Is Niemann currently better than Jason Hammel or Edwin Jackson? I'm not so sure. Niemann barely topped five innings per start last season in Triple-A Durham, he's also had issues staying healthy. Granted Niemann arrived in thinner form, but remember that post a while back, where I applauded the Rays for sticking to their plan? That same consensus still exists from me today.

I also suggested that perhaps 500 innings pitched in the minors before being called up was becoming a standard. James Shields and Andrew Sonnanstine both placed either over 500 or slightly below 500, both arrived on the big league scene looking far more polished than the days of Dewon Brazelton and Seth McClung. To date Jeff Niemann has thrown 238 minor league innings; he won't reach 500 or even 400 innings before making his big league debut, and it's a shame. I think a fair statement is that pitching more so than any other aspect of the game requires repetition and feeling comfortable in your own skin.

For Shields that meant developing a "plus pitch" and transforming into a better pitcher in general. In 2004 he posted a 2.6:1 K:BB ratio, in 2005 it went to 3.35:1, and in the 61 innings prior to his call-up in 2006 his K:BB ratio was an amazing 10.6:1. When I say he developed a plus pitch, I mean it, a scouting report following his 2004 days in Bakersfield stated he had an average change-up, nobody is calling that change average anymore.

Sonnanstine consistently showed he could handle a heavy workload without losing his control, and along the way developed arm angles and grips to give him an otherwise absent edge. Everyone knows Sonnanstine doesn't throw heat, but without toiling in Montgomery and Durham would his wisdom of the craft be at such a high level?

You can say only a few pitchers have nothing else to learn in order to improve their game, in fact the Atlanta Braves 1990's trio could be the only conceivable choices, and perhaps Johan Santana. The Rays are simply allowing the learning curve to happen on minor league time rather than costing the big league club, allowing for a sharper and more complete version of the pitcher to grace Tropicana Field's mound. In a business sense they're effectively juicing the best years out of the pitcher by leaving them down just a bit longer.

What I'm about to say won't be popular, but the Rays made the right decision with Niemann, and it goes beyond simply that he's not ready. Jason Hammel has thrown 640 minor league innings and he's out of options, and at the tender age of 25 figures to be on a short leash as one of the back-end starters. Edwin Jackson has also topped 500 minor league innings, but premature promotion by the Dodgers have essentially made Edwin a plague on the roster. I won't say they're as good as they'll ever be, but they're likely more prepared for success than Niemann would be, whether or not that translates over to actual success isn't guaranteed, but for now the team is simply doing as they should be and not as we, the fans, generally want; sticking to their plan.