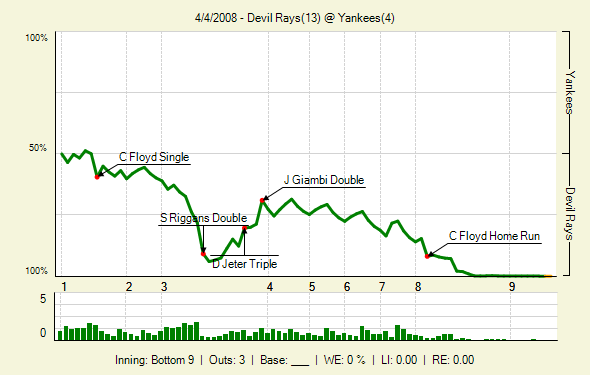 For my thoughts on the game, please follow the jump

What is there to say that the Rays' offense already didn't? To a Rays fan, this was the most fun ballgame that you've witnessed in a long, long time. A 13-4 win is satisfying any day you can get it, but for that 13-4 win to come against the Yankees in Yankee Stadium is just complete euphoria. To watch the New York fans stream towards the exits amidst the Rays' eighth inning beatdown was just a thing of beauty.
In looking at the game, the offense obviously gets the lion's share of the credit for a dominating performance. But starting pitcher Andy Sonnanstine also deserves some credit for his outing today. Sure, he didn't leave with a quality start and his ERA following the game was an even six, but for five of his six innings of work on Friday night, it looked like he and the Rays' rotation could be in for a long-term relationship. Aside from the third inning of play, in which Sonnanstine surrendered all four Yankee runs, he was absolutely dominant. In the other five innings, Sonnanstine surrendered no runs and just one hit; he didn't walk any all evening, while striking out four. Obviously, for the purposes of evaluating his evening tonight, you can't exclude the third inning from judgement. However for a season debut in Yankee Stadium against that lineup, Sonnanstine performed brilliantly. This is an absolutely critical year for Sonny's future, and he's off to a good start.
Also, while we're on the subject of pitching, how about the effort by tonight's bullpen? Three no-hit, shutout innings and just one walk allowed. You've especially got to like the four pitch, four strike inning turned in by RHP Dan Wheeler, who so far has earned every bit of his new contract.
But the bread and butter of tonight's game was clearly the offense, which so far has scored 25 runs through the Rays' first three games of play. That's awesome, and hopefully it's a pace that will be mostly sustained throughout the season. 2B Akinori Iwamura rebounded from a slow start in the season's first two games to reach base four times, including three hits. Also, 1B Carlos Peña hit an absolute bomb during the Rays' seven run eighth inning into the upper deck in right field. There was no doubt about that homer off of the bat; he crushed it. So far for Peña, who also drew a walk on the evening, there appears to be no letting up from the torrid pace that he established last season. He is earning every bit of his new contract.

Tying Peña's team-leading two home runs was DH Cliff Floyd, who launched a laser of a home run to lead off that eighth inning that cleared the right field wall. What is especially impressive about the home run was that it wasn't a meatball out over the plate that Floyd whacked. He took a pitch low and away from Yankees RH LaTroy Hawkins and drove it out on his own massive power. Floyd's knees continue to bother him, and his injury history is very well-established, but I'm hopeful that having the Designated Hitter position here in the American League will do him wonders. He has obviously got a ton of juice still left in the bat, and while he isn't as durable as the Cliff Floyd of yesteryear, he can still rake. Floyd also drew a walk on the evening.
The news coming out of the evening that C Dioner Navarro will be sidelined for at least 15 days is clearly unfortunate, especially since he was doing so well to start the season. You had to figure that Navarro was well on his way to continuing the second half that he had last year and putting that ugly first half behind him, which is why the injury he suffered is so painful. Add in the relatively fluky nature of the injury, and you have another terrible turn of luck for a man who has been well-versed in bad luck already. Here's wishing Navarro a speedy recovery.
The "good" to come from this injury, if you're even comfortable saying that, is the opportunity that it gives Shawn Riggans. Riggans is another individual that has been blessed with poor luck and plenty of injuries throughout his minor league career, injuries that deprived him the opportunity of an extended stay in the major leagues last year as Navarro's backup. I met Riggans once at an Instructional League game in the fall of '05, and there is just no nicer individual. He's very personable and articulate which, if you stuck around for Todd Kalas' interview with him postgame, you saw. No one is rooting harder for Riggans than I, and hopefully he makes the most of an opportunity that came to him in an unfortunate way. He clearly got a head start on that today, driving in three with a pinch-hit double in the third inning that gave the Rays a 5-0 lead. Riggans would pick up another hit on the day to finish two for five.
So obviously the Rays put up a well-rounded offensive game today. Credit also needs to go out to CF B.J. Upton and 3B Eric Hinske, each of whom had two hits. Upton also walked and Hinske doubled. Here are some other things I observed during the game: