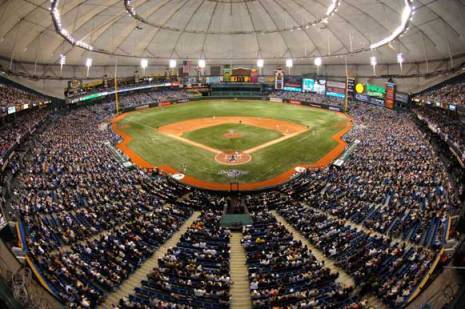 All Games Broadcast on RAYS RADIO/1250 AM WHNZ

For More on the Visiting Chicago White Sox, Please Follow the Jump

The surprising White Sox come into this series at Tropicana Field having won 11 of their past 14 games to surge back into the lead of the American League's Central Division. The Sox began the year hot and in control of the Central, but a slide resulted in the team dropping to 14-15 at one point. That provoked this epic pregame rant from Manager Ozzie Guillen before a game in Toronto, and say what you want about Ozzie, but the Sox are 15-8 since the rant and are back in control of the Central.

It would be advisable for them to step on the gas if they want to keep that lead in place, though. Many, including me, didn't expect the White Sox to be this good, and certainly no one prognosticated that the AL Central would be this bad. You have to figure that the talented Indians and Tigers will not remain in their respective ruts of incompetence for the whole season, and the Twins might continue to linger around and keep Chicago on its toes. Still, given the likelihood that Chicago will have as many as three other legitimate contending teams on its tail, they will need to load up on success now and place some distance between themselves and their division rivals, because if they wait too long and Minnesota, Detroit, and Cleveland are still close come August and September, then they are in trouble. The best is yet to come from those latter two teams.

Still, they are probably a good enough team in their own right to warrant avoiding the label "fluke". They come into the Trop having taken two of three from the rival Indians in Cleveland, though the Angels handed them two defeats over the weekend in Chicago. The Rays lost two of three to this same Chicago ballclub last month at home, the only times the two teams have met this year. The two do not meet again until late August at U.S. Cellular Field, and who knows what the American League could look like then.

As for now, though, the Sox are a team being driven by strong pitching, both in the bullpen and in the rotation. The team collectively has a 3.43 ERA, tied for second in the American League with the Toronto Blue Jays. The Sox rotation has been perhaps the biggest surprise of all. When LHP Mark Buehrle is your weak link, your rotation must be doing something right. The Rays do avoid RHP Gavin Floyd as a scheduled starter in this series, but they do face each of Chicago's top three starters in VORP, RHPs José Contreras and Javier Vázquez, as well as LHP John Danks. I will go into these individuals more in-depth in the game threads for their respective starts.

Chicago's bullpen has been similarly strong, with Closer RHP Bobby Jenks performing exceptionally well. In addition, setup man RHP Scott Linebrink is proving worthy of the four year, $19 million deal the Sox gave him in the off-season, at least for now. Whether he continues to be a good value is unknown, but with strong pitching from the other complementary members of the Chicago staff, their success in the late innings should be sustainable.

Less notable in the White Sox's success has been the role of their offense, which is surprising for a team that plays half of its games in homer-friendly U.S. Cellular Field. Chicago is in the middle of the pack in the AL offensively, with a collective .247/.327/.403 line that puts them sixth in the AL in OPS.

The mediocrity is broken up, of course, by the notable exception that is LF Carlos Quentin. He is hitting .297/.407/.589 for the year, and his 22.0 VORP is good for third in the American League. The former Diamondbacks top prospect can't be expected to sustain these numbers over the long haul, but he should be a very productive player going forward, and the Sox offense has needed his contributions desperately. The rest of the team has been disappointing, with OF Nick Swisher, in particular, an extreme disappointment so far. He is joined on that front by 1B Paul Konerko and SS Orlando Cabrera. 2B Juan Uribe is in that group as well, but thankfully for Sox fans, he has found himself a spot on the DL due to hamstring issues. DH Jim Thome, though not completely under water offensively, has thus far posted below average numbers for the Designated Hitter position.

So with that all said, the Sox can take solace in the fact that some segments of their team have been underachieving. While the pitching staff's rate of success probably isn't sustainable, neither is the poor hitting display put on by the Chicago lineup. You have to figure that those two factors will even out to produce a decent ballclub at the end of the year. Whether that will be good enough is entirely dependent upon how soon and how much Cleveland and Detroit will withdraw from their early season slumps.

These are the key games that the Rays need to continue to win if they want to remain contenders in the American League. Sure, they are going to have their hands full with intra-division games, but a four game visit from the AL Central leaders provides a prime opportunity for the Rays to take a gigantic leap forwards. How do the Rays match up with a deep pitching staff like Chicago's? The pitching has been the lynchpin to the early season success of both teams, but they are actually quite similar beyond that.

Though the Rays have been decent offensively, they are right in Chicago's company among AL clubs in OPS, and they too have had their fair share of underperforming players. Both have also been driven by good defensive play to the top of the league, surprisingly so in both cases, and it is a key to the successes of both pitching staffs. Chicago's bullpen is just as potentially shaky as our own, and both teams possess good rotations.

So actually, if you line up the components, the Rays and the White Sox are very similar teams. The Rays are a little bit better in most similar areas, and they are younger, but in the immediate, the two teams match up very well. It should be a quality four games of baseball between two of the best.

The goal should be to win at least three games of this series. If the Rays can hit the road having taken three of four against a division leader, they will be in exceptionally good shape. However the pitching matchups this series don't work their way into providing any obvious advantage for the Rays. A lot of these games are evenly-matched, with the games Friday and Saturday being the most appealing for me. Honestly, with the way the Sox are playing, I'll take a series split, and that's what I expect to happen. The Rays should shoot for three wins, but it is really hard to force a series win over four games against an evenly-matched club. It is near-impossible to force a sweep.