Per the Heater, one-year 650k.  Dewon Day promptly designated for assignment. The deal is advertised as a one-year contract, but the Rays will actually control Cormier's rights for an additional season, assuming they tender him next off-season.

Cormier is a 28-year old groundballer with a career FIP of 5.45.  As told, Cormier has a career 51.1 groundball percentage, and pitched well with Baltimore last season, 71.7 innings and a 4.04 FIP. CHONE has him dangerously close to replacement level (4.49 FIP, 71 innings) and Cormier's stuff relies on a cutter and curve. Cormier spent 2006 and 2007 with the Braves as a starter, and saw his numbers suffer because of it. Cormier's 2008 tRA was 4.53, his lowest in a while, but it's worth noting his tRA* have annually been lower than his actual tRA.

Cormier has a bit of a problem with walks, and actually fares better against left-handed batters, although neither of his career platoon splits are overly encouraging. And then again, nor is homerun per nine splits, although those seem to be more of an issue stemming from starting. 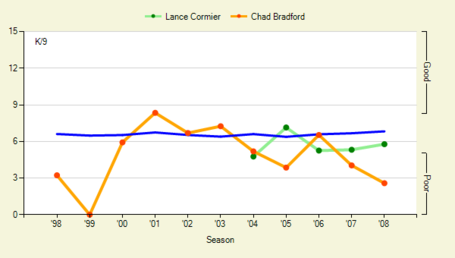 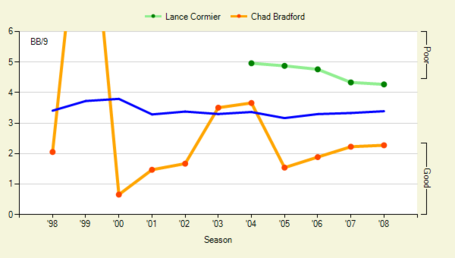 Today's candidate is another AL East non-tender, Lance Cormier. Cormier is somewhat of a swing man. He has been used predominately as a reliever(144 career relief appearances), but has made 24 starts including 19 over the past three seasons. Originally a draft pick of the Arizona Diamondbacks, he has also pitched for the Atlanta Braves and most recently with the Baltimore Orioles in 2008.

We love to look at the splits here at DraysBay, but we might not want to look at Cormier's splits because they are just awful. For his career, his LHOPS against is .858 which is bad, but that's a righty facing a lefty. Certainly his numbers vs. right handers must be better....wrong. His RHOPS against is a whopping .883. Basically, he turns a left handed batter into Joe Mauer and right handed batter into Miguel Cabrera. Career wise he doesn't look like a good option, but his 2008 season was very encouraging.

His FIP of 4.04 would've been the third best in the Rays bullpen behind Grant Balfour and J.P. Howell. His OPS splits also dramatically decreased on both sides, but especially against left-handed batters. His RHOPS against dropped over .100 points to .772 and his LHOPS dropped almost .200 down to a loogy like .667. That's a very encouraging number given the fact that he logged 31.2 innings vs. left handed batters in 2008. Also very encouraging is the number for ground balls he induced. For his career, he is over 51% ground-ball, but in 2008 that number increased to 56.8% while his fly-ball percentage dropped from 27.5% to 22.00%

So what was different from 2008 than the seasons past? Pitch selection. Cormier has three main pitches: A fastball around 90, a cutter around 88 and a curveball around 78. In previous seasons he threw that fastball over 50% of the time, but in 2008 he dropped that way down to 28%. While limiting his fastball, he started throwing his cutter a little more and his curveball a lot more. He threw his curveball almost 12% more in 2008 than in 2007 and 15% more than 2006. His career K/BB rate of 1.25 is poor and his SwStr% is unimpressive, but then again so was Chad Bradford's and Cormier won't cost $3.5 million.