Share All sharing options for: Fair Value For Navarro

The Rays and Dioner Navarro failed to come to terms yesterday before the team's self-imposed deadline. Navarro's agent said he would like to continue talks, but senior VP Gerry Hunsicker ended that idea pretty quickly.

"I do not see a situation where we would waver, it's our policy.''

As for not reaching agreement, Hunsicker said: "I can't say that I'm surprised, just disappointed.''

We learned late yesterday afternoon that the Rays offered $2.1 million and Navarro asked for $2.5 million. The difficulty is figuring out who the real Dioner Navarro is. He had an abysmal 2007, but was an All Star in 2008. So which is it?  He is definitely not as bad as his '07 season, but he probably won't much better than his 2008 season, which for a catcher isn't a bad thing.

As we've discussed the biggest numbers that will be thrown around in an arbitration are the "slash" numbers; Batting Average, On-Base Percentage and Slugging Percentage. For a catcher they will also probably use the percentage runners thrown out.

In the past two years there have been two players who have been ARB1 eligible with similar numbers to Navarro in different ways.  In 2007, Navarro and Gerald Laird had very similar number and they were awful.

The other comparison I want to make is to fellow All Star Catcher, Russell Martin.  Martin, like Navarro, was arbitration eligible for the first time this season. He received a 1yr/$3.9 million deal. Martin had an excellent campaign in 2007, but regressed in 2008. However, his numbers were on par with Navarro's.

Martin has the OPS advantage, but in these hearings batting average means something. Navarro was also far and away better at catching baserunners. If Laird's $1.6 million was Navarro's floor, then Martin's $3.9 million should be his ceiling.

Just to show how close Navarro and Laird were in 2007 and then Navarro and Martin in 2008, here are the charts Erik loves so much: 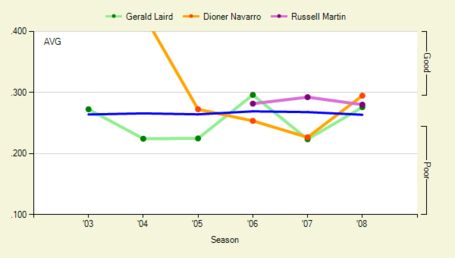 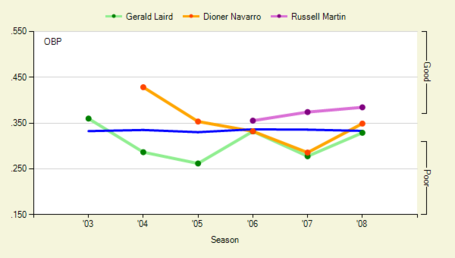 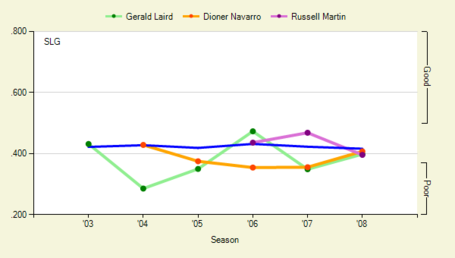 Navarro's request of $2.5 million falls right in line with the Laird "floor" and Martin "ceiling" theory. He had his Gerald Laird season and his Russell Martin season and his request falls almost right in the middle. It's a shame that the team and his representatives couldn't just split the 400k difference and save the headache of a hearing because as Paul DePodesta explains, "Arbitration is never a pleasant (or terribly productive) exercise for the parties involved."