Share All sharing options for: The DRaysBay Meme Guide

In an effort to make this place less esoteric, we're finally taking SeanDubbs advice and building a meme guide. The results are after the jump. (Picture somewhat unrelated) 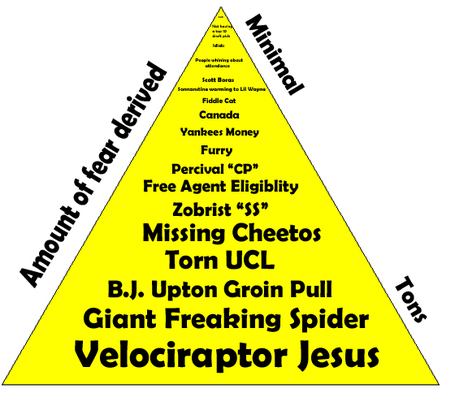 Ball on a Budget
During the St. Pete Bowl, B.J. Upton was quoted as saying "We're gonna ball on a budget." Said in response to the Yankees handing out big contracts.

Black Jesus
B.J. Upton's initials are B.J. and he ran on water.

Boo Him Now
Because booing a good player is stupid.

Boots With Fur
Willy Aybar used Flo Rida's "Low" song as his ditty. The lyrics include a reference to "Boots wit da furrrrr".

Brawlfense
Since Jonny Gomes never did regress, the best thing he could do on offense was start brawls. The fights lead to a bit of a scoring eruption, and thus, Brawlfense.

Cocky the Rally Rooster
During the 2007 season, Jonny Gomes bought a plastic rooster, nicknamed Cocky, that he would bring out during games as a good luck charm. In Jonny's honor we still use this.

Fiddle Cat
The user Sylar introduced the fiddling feline to us last season, and it stuck as a post-win tradition.

Friedman'd
The Rays version of "PWNED".

Furry
A user admitted he was of the furry kind. We went from amused to terrified as the season progressed. Raymond however, gives this two thumbs up.

Gabe of the Day
The Gabe (Kapler/Gross) platoon partner of that game.

GZA
Garza loves rap, and his name can be shortened to GZA. Go figure.

Lazy jokes
A parody of the typical Heater comments concerning B.J. Upton which sometimes bordered on racism. The formula for such a pattern is *Upton does something, good or bad* take said action, commit hyperbole, and attach the word lazy somehow. Like thus: *Upton hits homerun* "Wow, only a solo shot? How lazy."

J-Money
SRQ's nickname for Jeremy Beckham. A fringe prospect who has given us our entertainment.

JESSE DARCY
A user randomly posted a diary, in all caps, about JESSE DARCY being the next big pitching prospect.

Longlorious
SRQ patented. When Evan does something very good (aka most days)

LookoutLanding
The SBN Mariners site, ran by three of the better baseball analysts around.

STFD (Sit the **** Down)
During the 2008 ALDS, Orlando Cabrera kicked dirt at Grant Balfour. Being a bad, bad man, Balfour prompted to strike Cabrera out, and then screamed the phrase at him.

Basically: the idea that wins or losses mean everything is good/bad. They don't.

Reply Button
Use it.

Shift Button
Use it.

Spitfire
Per P Brady: "If Garza was in WW2, he would be nicknamed this."
I cannot confirm this, but whatever.

TEBOW!
UF fans seem to forget what site this is.

TWSS (That's What She Said)
No, she never did and never will.

TWMI! (That Was My Idea!)
Because, otherwise people might forget.

So, what are we missing?