A former Royals swingman in Single-A. Oliveros allowed a measly 7% line drives in High-A during 2007, but missed 2008 for some reason. When he has pitched, he walks nobody.  Here's what a Royals site had to say about Oliveros in 2006:

Oliveros doesn’t throw very hard, but his fastball was described to us by catcher Jeff Howell as "dirty," and he gets by with great movement and an assortment of off-speed pitches. The young Venezuelan just turned 21-years-old in September, and he shows enough promise that he could one day turn into a decent middle reliever in the majors. His upside probably isn’t anything more than that of a Mike Wood-type pitcher, but the numbers he’s put up thus far in his career are very encouraging.

Presumably Oliveros missed 2008 due to an injury, and the Rays caught him in the VWL with regained velocity. We've gotten a few takes on him:

So, generic reliever with great control, who will probably fizzle out in the minors. 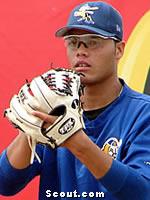 Update: Apparently there was no injury, Oliveros was simply released by Kansas City and went jobless all season. Oh boy.