Choate is 33 and throws sidearm. The Brewers gave him a major league deal last season and Choate spent 2008 primarily in Triple-A, striking out 7.15 per nine and walking 4.62. His career numbers (in 165 innings) are pretty close to that, and his career FIP is 3.87. Choate's career OPS versus lefties is .680, slightly better than the .745 mark given up against righties, but do note his usually outstanding groundball rates which suggest he's a nice fit for the Rays infield. Choate throws an upper-80's fastball and mid-70's slider. 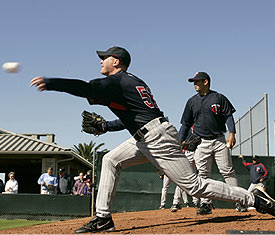 DePaula is less encouraging. I would peg him to fill a spot in the Durham rotation based on his starting adventures in his previous two minor league seasons. DePaula spent 2008 with the Edmonton Cracker-Cats (an independent league team), his arsenal consists heavily of an upper-80's fastball, high-70's curve, and low-80's change. Given DePaula's strikeout and walk rates, he doesn't translate too well to the majors.

Wrong DePaula. Julio is a reliever who finally reached the majors last year. His fastball sits in the low 90's and complements it with a change and slider. DePaula has gotten a decent number of swinging strikes and groundballs over the years, and unlike the other J. DePaula, could be decent in the majors.