On Monday I went over the best individual moments for the positional players.  Today we're moving on to the pitchers.  I didn't include Al Reyes or Gary Glover because...they're Al Reyes and Gary Glover.  Remember, we're thinking positive here.

Shields:  Another one that can be debated.  Was it his two hit shutout against Beckett and Boston, or was it the one hit, no walk, shutout against Anaheim?  To me it's the Boston game, even though the Anaheim game was the best pitched game in Rays history.

Sonnanstine:  To me it's his September 10th start at Boston.  He went seven innings, allowed four hits, walked none, and struck out seven.  He also out pitched Beckett.  Not many expected him to go into Boston and shut down the Sox.  He didn't get the win, but that was his biggest start of the season.

Jackson:  Not surprisingly nothing really positive jumps out for Edwin.  Looking at his season, it would have to be his April 10th start against Seattle where he went eight innings, allowing two hits and striking out six.  Easily his best game of the season.  I'm being encouraged to throw out the positives and go with a negative for Jackson.  Two words: Joe Blanton.  That's what we all remember.

Kazmir:  He had a string of very good starts early in the season, but I think the moment that pops out most is his win in the All Star Game.

Percival:  Saving "The Dan Johnson Game", the Rays biggest win of the season.

Wheeler:  Another easy one.  ALCS Game Two.  Pitches 3.1 innings of relief and allows one hit.

Miller:  Getting the final two outs of the playoff clinching victory against the Twins on September 20th.

Howell:  I think there's really too many to name.  He had many big outs against the Red Sox, and against most teams really.  Take your pick here.

Balfour:  ALDS Game One.  Striking out Orlando Cabrera and telling him to "Sit The Fuck Down."

Bradford:  He really didn't do anything that memorable with the team, but he did win his first game, August 9 against Seattle.

Hammel:  September 10th at Boston.  This was the moment of his baseball life.  Bottom of the 14th, Rays leading 4-1, for some reason Percival comes into the game and precedes to give up a lead off double followed by two walks.  Jason "The Hammer" Hammel comes in and retires Youkilis, Bay and Cora 1-2-3 to end the game. 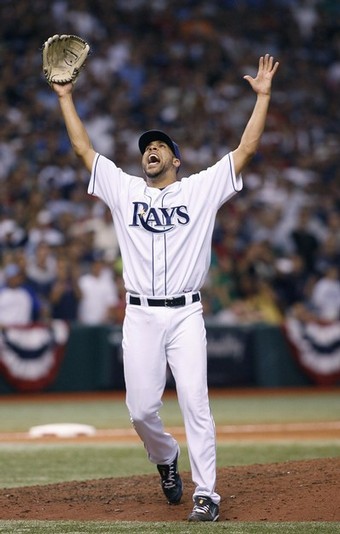