Share All sharing options for: Evan Longoria Is Channeling His Inner Eric Chavez

Evan Longoria has drawn comparisons to a lot of players: David Wright, Scott Rolen, Dick Allen (R.J.'s favorite), but after two seasons the player he is most trending toward is Eric Chavez. Before you take a gasp for air or head towards the Skyway bridge, remember that for many years before being perennially injured, Chavez was Evan Longoria. 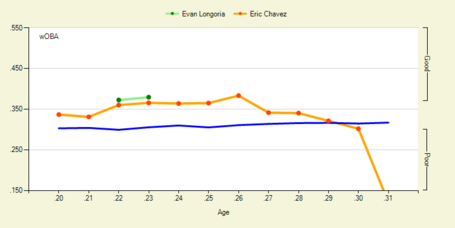 I have little doubt that Longoria can duplicate the numbers Chavez put up in his mid 20s. However, I hope that he is able to avoid the same injury bug that bit Chavez hard in his late 20s. So far, Longoria has had his fair share of injuries including: a fractured ulna chip (forearm), a mild foot strain, a hamstring strain, and a finger infection. Let's hope (pray) that Longoria's career is met with better luck and a better training staff otherwise we could end up like A's fans asking what could've been.