Along the way during the 2009 season something happened to David Price...in a good way. After reviewing Price's season month by month, I noticed that something happened between July and August. I'll let the chart speak for itself...

I left out the month of May as the 9 innings pitched is a smaller sample size in a study of already small samples.

As you can see Price went from a slight lean towards being a fly ball pitcher to a ground pounding gopher ball pitcher (slight exaggeration). My first instinct was that he might have thrown more curve balls or sliders and that would explain the increase, but looking at pitch usage by month this was not the case. In fact, Price went to less off speed stuff and increased his fastball usage quite a bit.

We all know Price loves his fastball, but he really loved from August on. However, this wasn't the same old 95 MPH rising heater that moved a little horizontally. This fastball moved in a lot more, moved down slightly more, and was thrown with a little less velocity; David Price had found his two seam fastball. 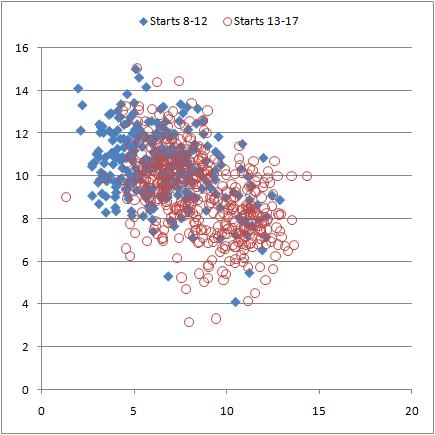 Thanks to R.J, we can see that shift on this plot. The average horizontal movement for the fastballs in starts 8-12 or July was 6.05. For starts 13-17 (August) that movement was 8.6. Vertically, the average blue diamonds moved 10.6. The red circles moved 9.2. Clearly, there was a shift towards more two seamers and this new process produced results.

I'd like to think the shift in pitch type had something to do with second half success along with regression and just some better luck, but a larger sample size is needed to draw conclusions. Nonetheless, it seems that while continuing the search for his lost slider and his continued experimenting with his off-speed and breaking pitches, he stumbled upon yet another new weapon. If Price gets the handle on all of them he could go from a two pitch pony to a five pitch thoroughbred in less than 12 months.