With this installment we now reach the half-way point in this countdown.  As a recap, here are Parts 1 & 2.  Here is a brief rundown of who has done what so far:

As we've seen out of James, when he keeps the ball in the yard, he can be a legit ace.  On this night he only gave up one extra-base hit, while getting 6 (21%) swinging strikes out of his change.  Watch that highlight link and see how foolish he makes guys look with his best pitch.  After a rough first, where he threw 30 pitches, he calmed down quite well with 4 innings of less than 10 pitches (counting the 8th when he was yanked).  What I find really interesting is his velocity throughout the game: 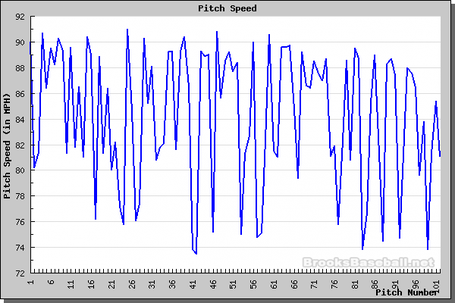 Perhaps this is because it was early in the season, but Jamie really tailed off towards the end.  A gutty performance and he was rewarded with the W for it.

You may remember this game as the "Thanks A Lot Offense" game.  Or maybe it's because of the no-hitter James had going into the 8th.  Things kind of went to pot in this inning.  Though, he, and the team, did not get a win, it was an outstanding start against an anemic offense.  The four walks are uncharacteristic, but the six K's were real nice, especially since he only got six swinging strikes all game!  For whatever reason he only threw 12 change ups on the game, instead going more with the bendy stuff (36 CU/SL).  On a night where he was nearly un-hittable we see that same trend as the previous listed start, the giant fall off the cliff in velocity around pitch 90: 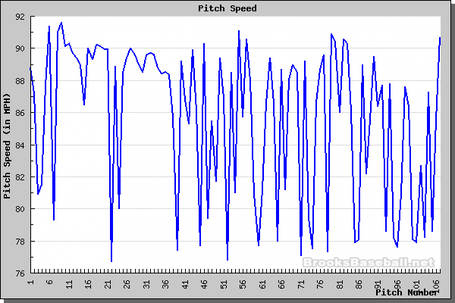 This was a pivotal time of the year and one that I know James is still thinking about to this day.  James, don't let the sour taste of this kiss turn you off from future no-hit courtships.

Wade Davis would make his debut facing a certain Mr. Edwin Jackson and what a debut it was.  Check out the video from the game and count all the times that Staats says, "Swing and a miss."  Seriously, do it.  Davis looks almost bored out there, but teased us with exactly what we were hoping to see out of him.  I doubt there is any correlation between successful first starts and successful careers, but it sure is nice to see one like this instead of a clunker.  His only real mistake was a pull-job by the King of Baltimore, Aubrey Huff, while also yielding a single and a double and only one walk.  He got his nine K's by being fastball heavy all night (11 swinging strikes (15%) from that pitch alone!) and mixing in a few of his devastating curveballs.  Unfortunately, the failpen was in full form, costing Wade his first W, but hopefully we will see many, many more down the road.  A couple charts before moving on: 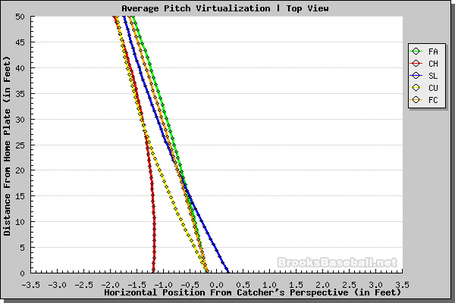 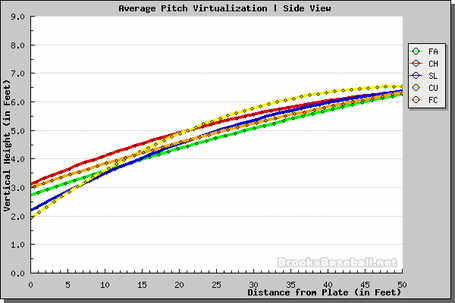 Look at the sick break on his curveball.  It looks a lot like his change until the 25 foot mark when it bites hard away from righties.  You'll also notice a bit of a hump but then it starts falling off the table at about the same point. 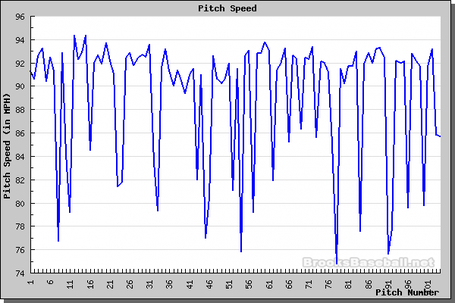 I wanted to show this last pictographical to compare to Shields.  Notice how his fastball stays over 92 throughout the entire game.  Great job Wade.

I think everyone here knows a good Sonnanstine performance just by looking at the above line.  The column that matters more than any other is the one with the BB over it.  The Yankees are known as a patient team, and yet, Sonny didn't walk a single man in the pinstriped pajamas all night long.  He pitched into the 8th using mostly his Cutter, Slider, and Curve.  The curve was his best pitch on the night getting 4 swinging strikes (21%), but another key to success is being able to pitch inside: 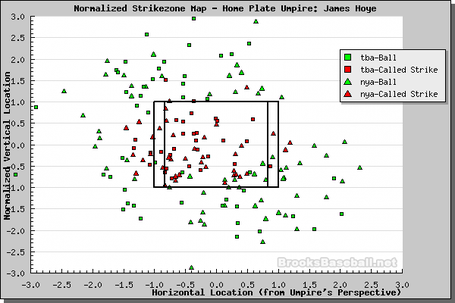 You can see that he feasted on the inner half of the plate and got a few calls to go his way.  It wasn't an all around pretty start, as you can see by the three doubles, but he kept the ball in the yard at New Yankee Bandbox and kept batters just off balance enough.

Niemann's fourth overall entry on this list comes from a night where he found a ton of success with his 3rd best pitch, the change up.  He got 6 swinging strikes (55%!!!) out of the pitch that he is least known for.  Though, he didn't bring it in quantity, it was certainly quality and not what they were expecting.  Again, he limited his walks, and though he gave up over a hit an inning, all but one were singles.  Most importantly, he didn't cede a homer to a lineup that knows how to use their ballpark to their advantage.  Unfortunately, the failpen showed up, yet again.  It was another loss when we could ill-afford one, but Niemann deserved one on this night.  There are no highlights from Jeff's start thanks to MLB devoting about 15 videos to Jeter tying Gehrig's hit record, but check out this graph: 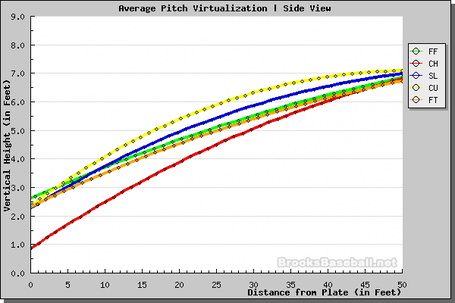 His change was dropping almost a foot and a half more than his other pitches.  Whatever he was doing in this game he needs to keep on doing, because Niemann with 3 plus pitches could be an outstanding weapon.  I would love to see him as a closer, but maybe there is something to the idea that it takes him a while to warm up, check out the front half of this: 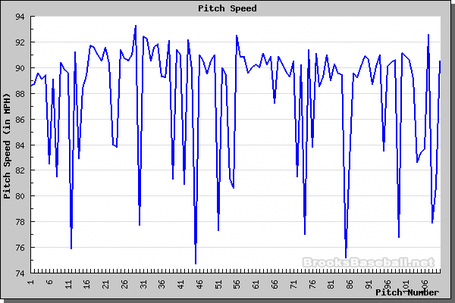 It took The Big Nyquil almost 20 pitches to really hit his stride.  I like how he stayed middle-away vs. lefties: 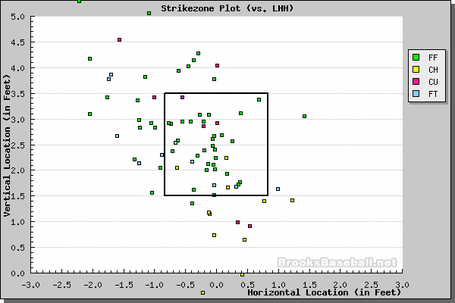 while doing basically the same thing versus righties: 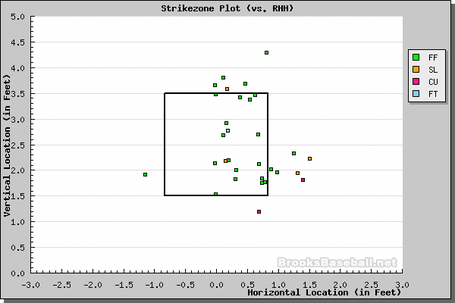 That concludes the nerdy portion of the program.  I appreciate your guys input, so please be sure to let me know what I'm doing right, and more importantly, what I'm doing wrong, so that by the top-10 we will have some real in depth stuff to talk about.  As always, big thanks to MLB.com, BrooksBaseball.net, and Baseball-reference.com.