The onus of being the top draft pick is never desirable. The money and fame might be, but the rest of it? No way. The expectations are usually unrealistic yet their absence speaks just as loudly. Try being chosen over a local player at a position of immediate need and things become a bit harsher. This is the Tim Beckham experience. The weight of the world is on his shoulders and reportedly shifting to his thighs, and some of it has nothing to do with his own production.

If the Rays selection of Beckham over Buster Posey works out as well as the last time a team chose a high school shortstop first overall to then see the top college backstop go a handful of picks later, then I think they'll be quite content with the pick after all. In 1990, Atlanta owned the top pick and had their choice of the litter and at the time had a pretty decent shortstop of their own. 24-year-old Jeff Blauser was a former top five pick of Atlanta's from the 1984 draft, here in his second full season in the bigs, Blauser was producing well enough, yet they still decided that a Florida shortstop by the name of Larry "Chipper" Jones would be their pick. Nearly two decades later, I would say that worked out well.

The statistical blemish for Beckham right now is his error rate. Now we all know errors aren't the best way to judge defensive performances, but this is the minors. Nay. This is the low minors. We have first-hand accounts and errors to go off. The scouts says he needs to improve his footwork in all regards and the errors total mutters a choice few four-letter words. The good news is Beckham has a strong arm and range. Shortstops without range are like horror movies without ambience; sometimes they work, but really they belong in a different section - meanwhile Brendan Harris sobs lightly while whispering to his shortstop glove, "You're my favorite fielding apparatus."

Beckham was ranked as the 28th best prospect by Baseball America prior to the season, and with such it's safe to consider him an upper-tier shortstop prospect. Mostly all young shortstops make errors. It's part of the learning curve. Beckham made 45 this year, a number high enough to make some squeamish. To see whether A) this number is really that much higher than most shortstops, B) he should improve moving forward - and if so, by how much - I took each of the shortstops BA ranked in the top 25 from 1990-2005 and plugged three of their minor league fielding seasons into a spreadsheet.  In some cases they were ranked for the first time in their first year, meaning there was no "before" season, in some their last year, meaning no "after" year.

Before launching into the details, let's go over some potential biases in this selection:

Survivor bias: These are the guys who lasted as shortstops long enough to be top 25 prospects. That doesn't necessarily mean they were good at the position, but their organizations simply stuck by them.

Selection bias:  Well, duh. I'm placing Beckham alongside the brightest shortstop prospects. This could be extended to every minor league shortstop since 1990 aged 19 through 23 and the results likely differ. I'm not interested in where Beckham ranks amongst all shortstops though.

Sample size: Try as we might, there's only so many cases to look at when going off a list that dates back to 1990 and data that is relatively disorganized until recent years.

To give context on what ages we're dealing with, here is an age frequency chart.  This simply shows the ratio of those aged seasons appearing. Age-20 seasons are the most common in this study, and 19-21 is the most common three-year stretch with 20-22 in hot pursuit.

Now a look at the error and chances sums, which follow the age frequency chart as you would imagine: 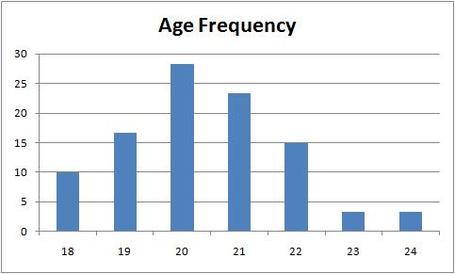 And now let's look at the error rate [Errors/Total Chances] by age: 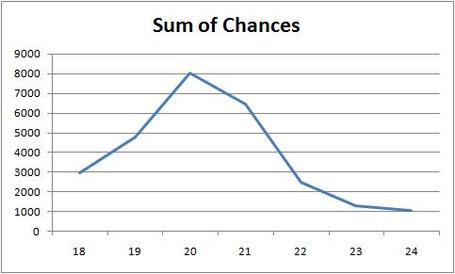 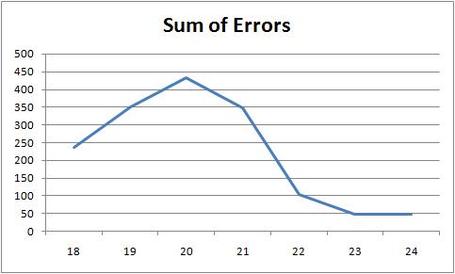 Pretty much what you would think. Shortstops make - or are charged with, at least - fewer errors as they age. The highest rates easily being during their teenage years.  Let's look at some averages by rank year: 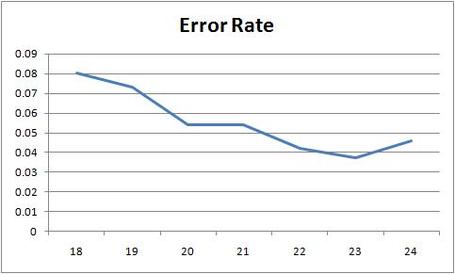 There's small sample issues to deal with here, but Beckham is better than the guys who experienced the same ages so far and if their past is any indication, he's going to improve on that error rate next year. Who were these guys? Well, let's see: Chad Hermansen, Hanley Ramirez, Mark Lewis, and Wil Cordero. Not the best of groups since half of them wound up at non-shortstop positions, and Hanley is either questionable or fantastic depending on the day.

So what are the odds that Beckham changes positions? Well of the 23 surveyed shortstops, the positional breakdown was 15 who spent the majority of their career at shortstop, 3 who wound up in the outfield, 3 at third, and 2 at second base.  And again, two of those eight were in Beckham's boat, only slightly worse.

Maybe Beckham can follow in their footsteps instead of hearing Posey's.