What was once lost is gained again. A source close to the situation has informed us that Swindle is indeed back in the organization on a minor league deal with an invitation to spring training.

As you can expect, his velocity will not scare many batters. His average fastball sits in the low-80s and tops out below 85. He throws a smorgasbord of complementary pitches though, some that even confuse the pitchx classification algorithm into calling them "unknowns". This is probably because pitchfx isn't used to seeing pitches below 60 miles per hour, but Swindle threw  a few as low as 52 miles per hour. Yeah, he's not lighting up guns, he's just dulling the batters to sleep by throwing ridiculously slow curveballs (at least, that's what they resemble).

In a small sample size of a little under 170 pitches last season Swindle saw a fair number of whiffs on his change-up (38 throws, 3 whiffs), four-seam fastballs (39 thrown, 3 whiffs), and sliders (23 thrown, 2 whiffs) and for his Majors career has a league average contact rate around 80%. In the minors Swindle has consistently recorded doubled digit whiff rates, including an impressive 11.8% in 2008 and 11.1% last year in Nashville.

His real name is Robert, and his career minor league splits include a 42% groundball rate against lefties, 13.8 strikeouts per nine, 2.09 walks per nine, and zero home runs allowed against 255 batters. He hasn't been too shabby against righties either, but for now at least, Swindle should be entrenched in a LOOGY battle with Randy Choate (and whomever else) come spring training.

Note that most pitchers seem to throw intentional balls around 60 miles per hour, and that Swindle is throwing regular pitches at a slower rate and seeing success.  On the flip side:

His whiffs by velocity (Justin Morneau is the "slow ball" whiffer by the way):

I can't think of many pitchers with a 30 MPH spread in pitches whiffed at.

All of his pitches movement: 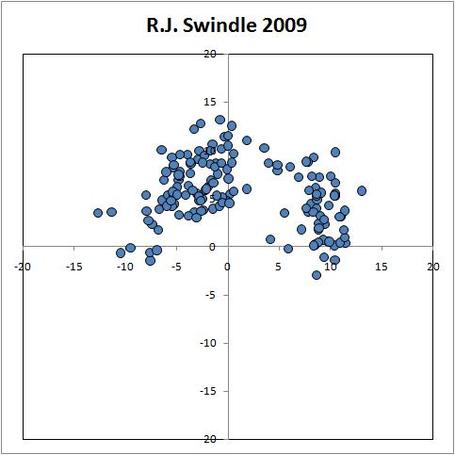 And his release points (hint: he's a sidearmer): 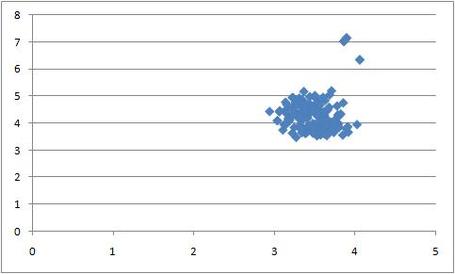