I like how Fangraphs gives you convenient graphs showing how players have performed versus the league average over a long period of time, like so: 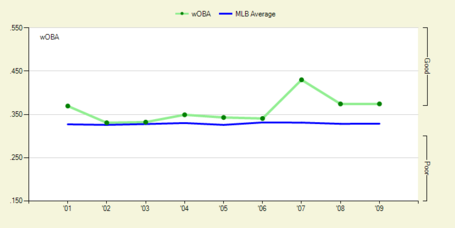 Looks great, right?  Carlos is awesome compared to the league average over the last three years.  The problem comes in when you consider that he's a First Basemen.  Most of them should hit better than league average.  We can use positional adjustments to level the playing field, but I wanted to look at this in a different way.  My goal was to create a baseline for each position at the AL, NL, & MLB levels.  These baselines can be used at the player level, or as in this case, to see how a team stacked up at a position compared to the rest of the league.

First off, here are the league average wOBA's for each position, by league, with the Rays:

I should mention that nothing in this article has been park-adjusted, but you can see that 3B, SS, & LF grade out incredibly well compared to the rest of the AL.  Catcher not so much, with 1B, 2B, CF, & RF in various locations around the average.  Using the formula (wOBArays-wOBAal)/1.15*PArays I could convert this to wRAA to get this:

This converts those wOBA's to runs so that we can just focus on one number.  As you can see, the same thing has been borne out.  It's much easier to see that, at the plate, our catchers provided over 2 losses compared to the average AL team catcher.  With CF and DH providing the next lowest amount of runs (almost a win), and SS, 3B, and LF providing a ton of offensive value, relative to league average for that position.  As we know though, offense is only part of the game.

From here, I decided to factor UZR in for all the players that manned each position.  This was a simple weighted average using the UZR*Innings added up for all players and divided by the total number of innings for the position.  Obviously, catcher and DH were omitted.  These positions will only be looked at with an eye for the offensive portion.  Here's the UZR for each position:

Clearly, 3B & LF are a cut above.  CF, RF, and 2B are a notch down, but still worth close to a win with their defense.  1B and SS were the only positions manned by below-average defense over the course of 2009.  Bringing both sides together and dividing by 10 gives us a look at WAR*.  It would look something like this:

Our best position, relative to the rest of the AL was 3B, followed by SS, and LF.  Those were elite positions giving us a ton of value.  We managed to get a little over half a win out of 2B, while CF & RF were basically league average.  Those are the positives.  Negative values were earned by 1B, DH, and C.  If you add all that up you get 9 WAR, but what does that tell you?  Is 9 good?  Is it bad?

To get an idea, I wanted to do this same exercise for every team in the AL.  This chart is what you would get (Click to enlarge): 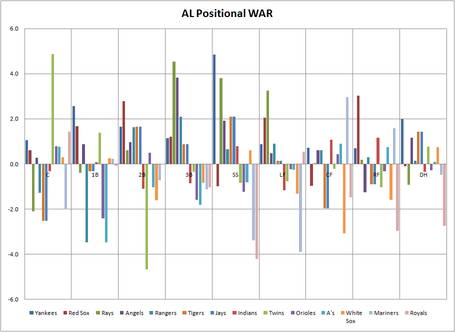 That may not be completely clear as there is a ton of stuff crammed in there, but I will attach a file at the end so that you can download the entire workbook.  The main thing to take out of this is to a) compare the Rays to the rest of the league across positions, and b) so that you can see which teams had great seasons and which ones got stuck with an awful performance.  Yankees SS and Twins C had the largest contributions at 4.9 WAR, while Twins 2B was almost the mirror opposite at -4.7 WAR.  Here is a table with how each team did at each position.  I will be following this up with charts for those that like pretty pictures over numbers.  These are sorted left-to-right by most team WAR to least team WAR.

You'll notice that the Yankees are the only team to not have a negative position and that the Rays were only .3 WAR out of 2nd place.  The Royals were the Royals.  I now want to take a magnified view of each position.  This should give you a great look at how each team did filling each position.  First off Catcher: 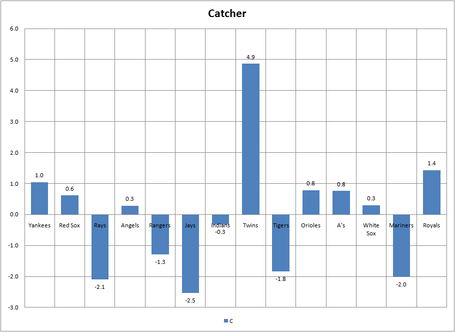 As you can see, the Twins catchers were the best in the league, and it wasn't particularly close.  The Royals trotted out the second best catchers, remember we're only looking at offense here.  The Jays had the worst catchers in the AL, while the Rays took second in that honor barely beating out the Mariners.

Next up is First Base: 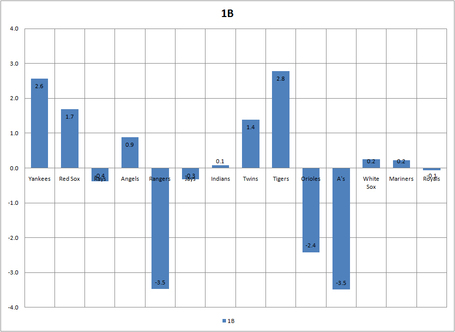 Moving along to Second Base: 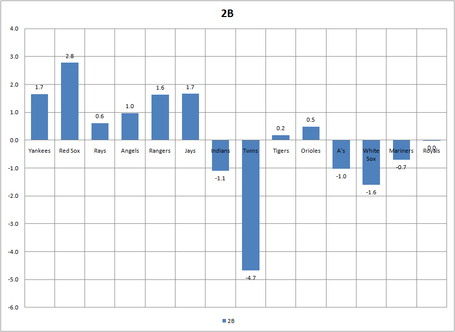 Finally, the Rays are in the positive, barely beating out the O's for 6th at 0.6 WAR.  The leader here was the Red Sox with 2.8 WAR, while the previously mentioned Twins 2B was a black hole at -4.7 WAR.  Kudos to the for spotting it early and getting J. J. Hardy.  He should allow them to slide some things around in that infield.  Something that I found interesting is that the best six teams in the league had the best second basemen.  Random variation is fun.

At last we get to Third Base: 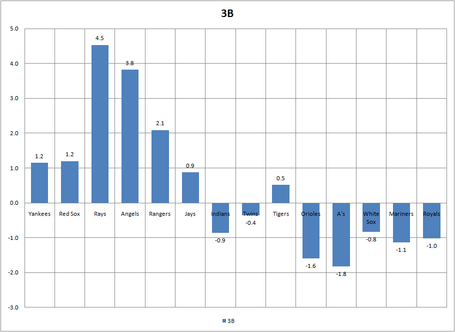 Our 3B was one of the best positions in the league at 4.5 WAR, but don't forget about the Angels at 3.8 WAR.  The A's and the O's were the worst, though, there is a solid cluster of teams around -1.0 WAR.

Shortstop was another position that we did well in: 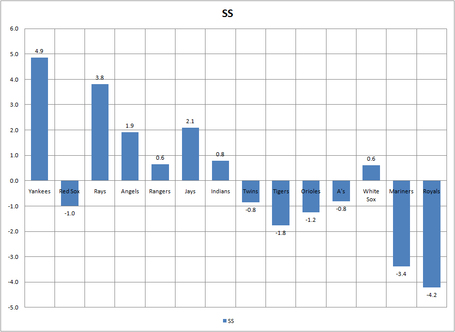 We came in second at short, trailing the Yankees by over a win, while the Royals were abysmal beating the Mariners to the bottom by almost a win.  Hmm, what's the common thread there?

Left field should treat us well, let's take a look: 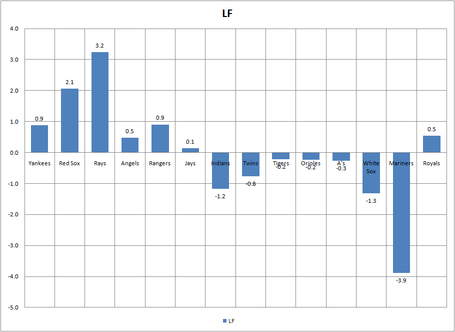 The Rays were over a win better than the Red Sox in LF, while the Mariners might be in the market for a top-notch LF. 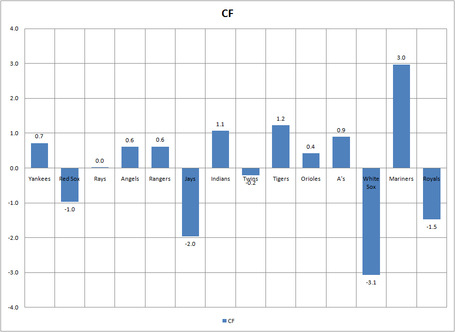 You can see that the Rays broke even landing slightly in the bottom-half of the league.  The Mariners CF was almost 2 wins better than the Tigers, the next best team.  Meanwhile, the White Sox got nothing out of CF besides a -3.1.  The Jays were next to last, but of course this doesn't take into account contract size.  YET!!! 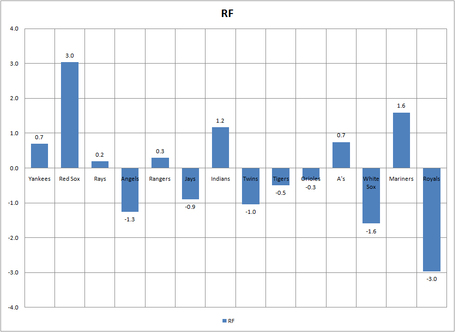 As you can see, the Rays actually got positive RF play, on the whole, though it can't hold a candle to what the Red Sox got.  The Mariners barely beat out the Indians for second on the good side, while the other side of the coin shows the Royals getting -3.0 WAR out of their RF'ers.  The White Sox and Angels were the next worst at -1.6 & -1.3, respectively.

Lastly, we have the Designated Hitter: 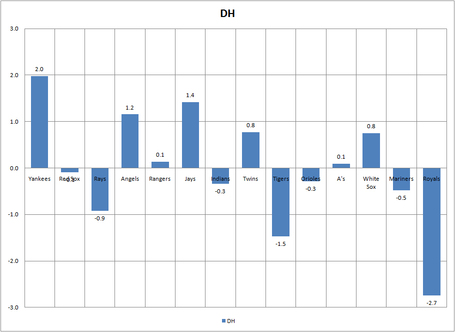 The Rays ran the 3rd worst DH out over the course of 2009.  They Royals were about three times worse at -2.7 with the Tigers trying to chase them down at -1.5.  Meanwhile, the Yankees got two wins out of their DH and the Jays came in second at the position.

You can download the totals workbook AL WAR TOTAL

I recommend it since you can play with the numbers, use the formulas, and see all the charts.  Also, you can see the MLB and NL charts.

Here is one for the RAYS

If you are a fan of another team, please e-mail me and I will send you the book, I just don't want to take the time to put 13 more links in here.  Alternatively, feel free to plug in your own data.  Once you have the wOBA, just plug in to the team sheet, table tab, column E.  You will also need the PA's for column J.  UZR, you should be able to figure on your own.  Please let me know if anyone decides to do this for the NL teams, it's actually pretty quick to do each team, and I'd love to see how it comes out.

As always, let me know any questions either via e-mail or in the comments.  Please leave some if you liked the piece, didn't like it, have questions or opinions, or don't.  Thanks to Baseball-reference, The Book, Fangraphs and Sternfan1 for giving me the courage and strength to argue with people all day.

* I know that what I am calculating is not WAR, per se, since it is above average, not replacement.  I will use this term so that I don't need to add another acronym to the too crowded landscape.  Think of it like WAR, but not precisely.