A Few Observations on the Rays 2010 Payroll

Share All sharing options for: A Few Observations on the Rays 2010 Payroll

First, whoever decided on the exact payroll figures since 2006 is a fan of checks ... and checks: 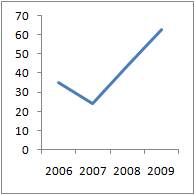 Here are the 2010 payroll numbers as told by Cots with some lame duck estimates for arbitration and incentives thrown in. The Rays rarely go to arbitration, so I would guess most of these cases are settled before the alternative becomes a reality. It would seem to me the wild card in this is B.J. Upton's potential case. His representation, headed by Larry Reynolds, has spoken numerous times about how the baseball pay structure is not set up for the exceptional talents like Upton. I'm going to go ahead and guess he's not a fan of arbitration. Jason Bartlett's case is also interesting, although the Rays seemingly handled a similar outlier performances with Dioner Navarro last season and Carlos Pena following 2007.

This $58M payroll is ridiculously top-heavy. You don't need quintiles in order to figure out that the top five salaries take up more than half the projected sum.  The Rays' three highest paid players each have assignment bonuses in the case of a trade. Carlos Pena will be paid $0.75M if dealt; Carl Crawford half a million; and Pat Burrell $200K.

Speaking of which, each of the triumvirate is eligible for free agency following the 2010 season. Nearly 30 million combined in 2010 potentially gone in 2011. Cannot wait to read the rosterbatory Fanposts by new users as that off-season comes ever closer. "SHOULD THE RAYS SIGN DEREK JETER???" isn't a question asked enough.

Such great flexibility comes with its price, as that's a decent amount of talent to replace. The other cost is a strict budget for 2010. Depending on what happens with the arbitration cases and a potential Pat Burrell deal, the Rays are looking at probably $4M < x < $8M to spend if they simply match last year's opening day payroll. That's not much, but probably enough to add a few relievers and a catcher.