Trying out a regular feature of sorts here. Basically, anytime a role-playing corner outfielder with a major league track record is signed, we'll compare the contract to Gabe Kapler's one-year $1.05M deal. By the time the off-season gets rolling this will probably be forgotten, but for today at least, it is well and alive.

The White Sox re-signed Mark Kotsay today for one-year and $1.5M, or a difference in salary of $450K. Kotsay is left-handed and will soon turn 34-years-old (like Kapler) but over the past three seasons has combined to hit .260/.315/.372 in 868 plate appearances. Defensively he plays a fine first base, asking anything else of him is asking for too much. He's a platoon hitter at this point, as you can see below, and he's not too poor against righties, however insert a lefty and Kotsay is an automatic out. 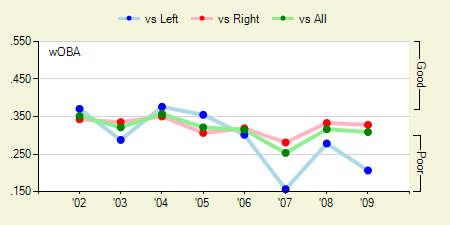 Compare this to Kapler, who's hit .268/.336/.443 over his last three seasons (630 PA) and plays above average defense in the corners. Kapler hits the opposite hand better than Kotsay and is even superior against the same hand - Kotsay's death bed scene is going to involve cursing those of the unnatural dexterity -- despite a rough 2009.  He's a superior player by every means and for whatever reason Kotsay is making almost half of a million more than him.

Kapler wins this round.