Share All sharing options for: Rays 2008 Outfielders by wRAA/UZR

Dave Cameron put together this wonderful graph that charts 2008 outfielders by wRAA & UZR. 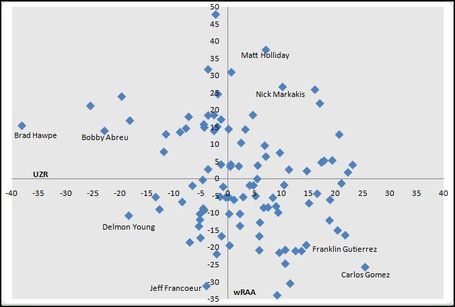 So where did the Rays outfielders fall in 2008? I set the qualifications to 300 PA/600 innings in the outfield so we have four qualifiers. Surprising the Rays had three outfielders in the upper right quadrant or as Cameron calls it the place where Carlos Beltran, Grady Sizemore and Nick Markakis hang out. The Rays also had one outfielder place in the lower right quadrant(bad bat/good glove) where Carlos Gomez lives. So who went there?

B.J. Upton was no surprise as a member of the upper right club. He finished with a UZR of 7.8 and lead Rays outfieders with a wRAA of 14.3. He should only improve on this in 2009.

Carl Crawford appears in the lower right portion joining Gomez and Franklin Gutierrez. We all know CC had a down year in 08, I'm happy to report he would've been in the upper right club from 2004-2007 and figures to get back there in 2009.

That leaves two outfielders on the Rays and two members of the upper right club. This mean that  the good bat/good glove group includes: Gabe Gross and Eric Hinske. Hinske barely makes both with a UZR of 4 and a wRAA of 4.6, but he still makes the club and should be a good value for the Pirates this year.

Gabe Gross, who is often categorized as average or not that good turns out to be pretty damn good. Defensively, he was well above average with a UZR of 15.0 which was right behind Crawford. Offensively, his wRAA of 1.3 means his bat was just good enough to get him in the high rollers club and was higher than Corey Hart, Kosuke Fukudome and Jay Bruce.  I'm not saying Gross is on the level of Markakis, Sizemore or Upton by any stretch, but he's a lot closer to those players than a lot of people give him credit for.