Share All sharing options for: B.J. Upton May Hit Leadoff

There have been whispers that, with the addition of right-handed power hitter Pat Burrell, Maddon may restructure the batting order, moving Upton to the leadoff spot (where his power and speed would be a dynamic combo) and dropping Akinori Iwamura toward the bottom.

That would only make sense. Neither Upton or Iwamura swing outside of the strike zone much, but Upton is much more likely to take a walk, hit for power, and steal a base. Upton could very well be the Rays best hitter, and he's a fine choice to get the most plate appearances in the lineup. Plus more chances for people to boo. Yay! 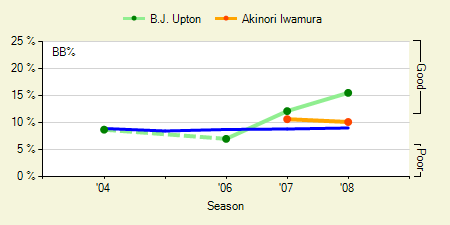 Meanwhile, Gary Shelton asks the well thought questions, like this:

Will a No. 5 starter be able to match Edwin Jackson's 14 victories? What happens if streaky hitters such as Burrell and Carlos Pena slump at the same time?

Gary should probably devote most of his columns to football, that or read a book that talks about streaks and slumps. Like, I don't know, The Book .Hitters go through streaks and slumps all the time, for instance: 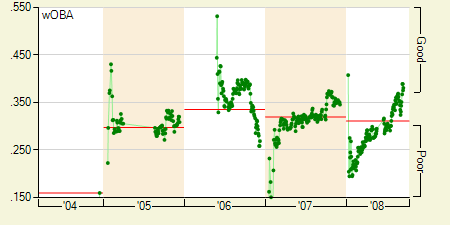 That player has never been referred to as streaky. This player has: 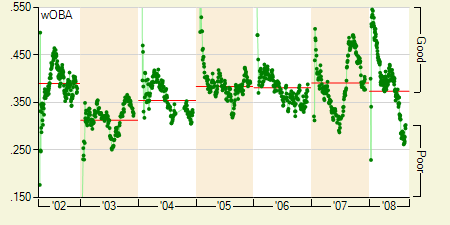 Not only does the second player finish with a higher average, but his highest peak and lowest valley are too.

The first player is Jason Bartlett.

The second is Pat Burrell.