We'll have our Day 3 recap up this afternoon, but here are a few tidbits to pass along.

The Rays have split the 31 pitchers in camp into two groups to monitor work loads.

"We'll set them up in two groups," manager Joe Maddon said. "One group will pitch more in the beginning and the other group will pitch less. Obviously the guys that have been with us will pitch less. We looked at the early start of camp and thought it would be unwise to push any of those regular guys and start their clock at that particular juncture. The way we're going to set it up, guys are going to get plenty of work, we're just choosing to do it this way. And I'd be surprised if other people did not choose to do it the same way."

Also from the Times:

CF B.J. Upton, cleared to start swinging at soft tosses in his recovery from Nov. 11 shoulder surgery, said it's going so well he's not so sure he'll need to miss the first week of the regular season as expected.

"I'd say no timetable, because the way it's feeling there's no telling," he said.

Pat Burrell spoke to Jim Thome about making the transition from fielder to full time DH.

"For him, it’s really worked out great. He enjoys it. He said it’s something you have to kind of get your feet wet in and over time you kind of figure out what’s going to work for you," Burrell said.

"I’m going to have to find a way to stay active. I don’t think I’m going to be somebody who can just sit in the dugout and wait for his time to come up," he said. "I’d like to sit here and say I’ve got it all figured out, and I know what I’m going to be doing, but I think it’s kind of a work in progress."

But Joe Maddon still plans to give him some time in the OF, at least in the Spring.

"During camp we’re going to put him in the outfield some. … You just don’t know how the season is going to play out," Maddon said. "The primary plan would be to play him as a DH, but you don’t know what’s going to happen otherwise. … He’s a fine outfielder. We could still do that." 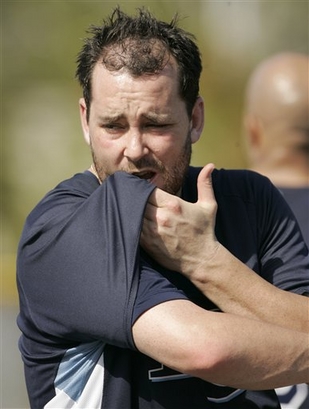