One of my favorite baseball analysts, Rich Lederer, has been giving us a lot of material lately on how to categorize pitchers. He started out with the strikeout and ground ball rates, and has now added walks into the equation. The reason we measure pitchers this way is simple.

The first category features names like CC Sabathia, Dan Haren, Roy Halladay, Cliff lee and Brandon Webb. Your typical every day ace types. The next group also features many ace types like Josh Beckett, Cole Hamels and Ervin Santana, but features some surprises like Wandy Rodriguez and Ted Lilly. The third group still features an ace in Tim Lincecum and many other good names like A.J. Burnett, Felix Hernandez, Clayon Kershaw, but also has Jorge De La Rosa, Brett Myers and Doug Davis. As you go down the lists you'll see the quality of the pitcher drop. Once you hit the K- BB- GB- or last group, you find names like: Brandon Backe, Barry Zito, Adam Eaton and of course Edwin Jackson.

James Shields, again, shows up as the true ace of the staff. With above average marks in each category, Shields is in group one with the Sabathias and Halladays. At age 27, Shields should be breaking into his physcial prime meaning he should only get better and better. I'd like to mention Shields will make $1.5 million in 2009 and $2.5 million in 2010. Andrew Friedman, you are a bad, bad man for this one.

There is a bit of a drop off from Sheilds to the next Rays pitcher. Kazmir is next, but falls in the K+ BB- GB- group. Kazmir always has a high walk rate, but because of the decrease in slider usage, his GB% plummeted down to 30.79% in 2008. This was 13% lower than 2007 and roughly 10% lower than his career. Hopefully, when he gets that slider feel back, his GB% will move closer to the average rate.

Our final two Rays, Sonnanstine and Garza, appear in the sixth table or K- BB+ GB-. For Sonnanstine this is no surprise. He was never confused for a big strike out guy, but doesn’t walk many and is just under league average in GB%. For all the hype surrounding Garza, this may seem as a disappointing landing spot, but if you look at the raw numbers it's not. Garza’s K/BF was 0.32 below the average and his GB% is within two percent of being above average. Garza faced 772 batters in 2008. If he would’ve had three, yes three, more strike outs he would’ve been in the K+ BB+ GB- category with Hamels and Beckett. If you go a step further and have just 15 more ground balls out of the 772 batters faced, then Garza would be in the +,+,+ category with Shields.

Here are the Rays pitchers in chart form compared to each other and league average: 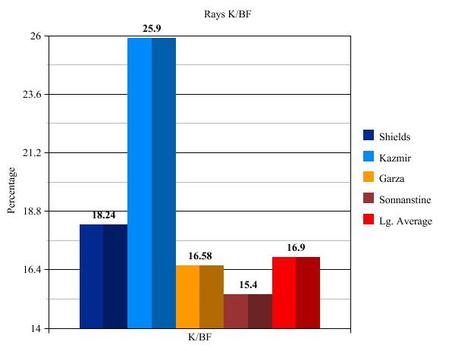 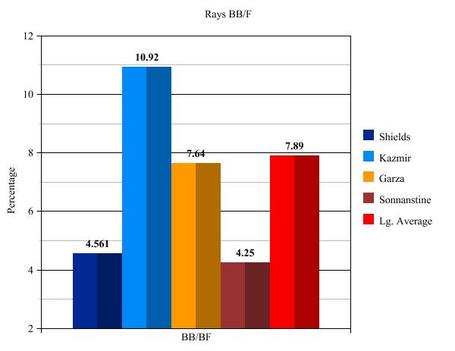 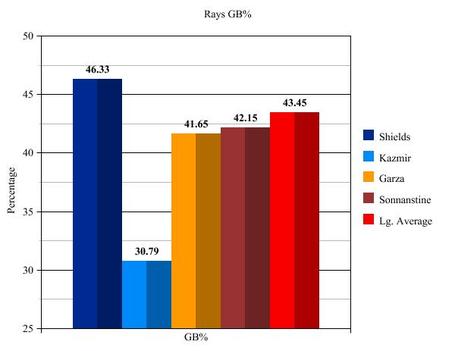