People are going to hype this move as the Rays "adding an established closer" and such, but here's a fun game, tell me who Player A is in this comparison:

Both are ALL-STAR CLOSERS and usually hurt as of late.

Of course, that doesn't mean I'm complaining about this deal. Depth is good and I'm willing to discount Isringhausen's numbers due to some obvious injury issues. For instance, if you take 2005-2007, Isringhausen is worth ~0.1 wins per season, which is a realistic expectation for him in 2009.

Izzy's fastball has remained between 91-92 on average along with a high-80s cutter and a high-70s curveball. To his credit, Isringhausen does have a history of inducing groundballs and oddly two of the past three years have seen an uncharacteristically high amount of homeruns. Whether that's due to Isringhausen or simply a luck thing is a guess at this point. Isringhausen's strikeout rates have been right around his career average as of late, but recently inflated walk rates and homerun rates have sunk his efforts. Hopefully, two side affects of his torn flexor tendon. 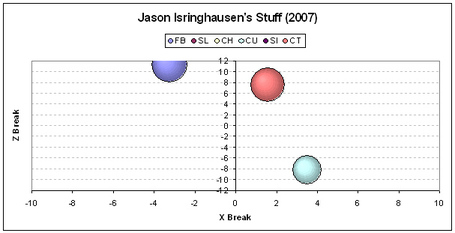 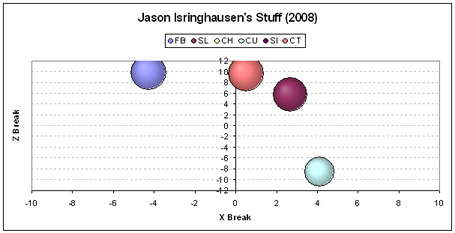 Oddly, it seems that Isringhausen's fastball moved more horizontally but less vertically. Izzy's change-up remained the same, but his cutter was flat, which sets off alarms about his homerun totals. Let's hope that cutter is back with health.

On a minor league deal, and for substantially less than what a certain similar reliever is making, you can't hate this deal. The Rays continue to add potentially useful depth in their minor league system with low-risk, medium reward types. Morgan Ensberg, Adam Kennedy, the boat of middle relief types, and Isringhausen may or may not add value to the 2009 Rays, but you can't fault the thought process behind any of these moves, regardless of the result.

Updating, 8:45: The value of Isringhausen’s deal will be based largely on how often he pitches and in what situations. It sounds like he could clear $2 million with frequent appearances in 2009, and bump up even higher than that if he ends up in a closing role and accumulates a lot of games finished.

If Isringhausen is healthy, he should be worth 2 million.

Oh, and every member of "Generation K" has now been acquired by the Rays at some point in their career. Fun.

Player A is Troy Percival.