Rays Signing Veterans For Depth. Why Not Ivan Rodriguez?

Share All sharing options for: Rays Signing Veterans For Depth. Why Not Ivan Rodriguez?

Since Andrew Friedman seems to be in the mood to sign still capable veterans for around the league minimum, why not take a flyer on Ivan Rodriguez? The Rays don't need much at this point with starters, backups and backups-backups in place, but if you ask me the one position the Rays are lacking major league ready depth, it is catcher.

Now the backup catcher isn't the most important person on the team, but should Dioner Navarro go out for an extended period of time are you really comfortable with a Shawn Riggans/Michel Hernandez tandem? Are we prepared to see the defense of Riggans and John Jaso share the catching duties?

These past few signings show that Friedman and Co. really want to have major league ready depth and who available is more major league ready to play catcher than Ivan Rodriguez? Aside from the speculation and "only god" knowing if he was/is on the list of the 104 positive tests from 2003, Rodriguez is still a useful catcher and a much more attractive option than Riggans or Hernandez.

Offensively, Rodriguez has declined over the past few years, but even at his advanced age, he's still better than Shawn Riggans and the Rays wouldn't even let Michel Hernandez swing a bat. His walk rate is bad, not just bad, but really bad. In 2007, he accumulated 515 plate appearances and walked nine times. But we're not asking him to be Pudge circa 2000, we just need him to be close to Dioner Navarro and as you can see in 2008 he was pretty close. 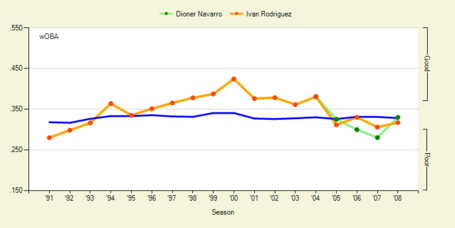 Over the past three seasons, Pudge has been on average a 2 WAR player. Navarro over the past three years has been a 1.4 WAR. And while that depends a lot on playing time, if he puts up a similar wOBA(.317) in 2009 and accumulates around 200 PAs, he'd be still be worth close to a win over replacement level or about $4 million dollars.

The biggest plus for Rodriguez is he can still play defense, and his arm at age 37 is again better than Riggans. Over the past three seasons, Pudge has thrown out an average of 28.8% of potential base stealers. Riggans was 1 for 24 in the category a year ago and he also has the tendency to give up the dreaded passed ball.

While this may just be a figment of my imagination and me just passing time on the weekend before spring training, I see no downside to making a move like this. Assuming Rodriguez is comfortable with playing for around the league minimum and serving as a backup and mentor to the one they call "little pudge", it seems to work out for both sides..  Rodriguez gets a shot a being a useful player on a championship caliber team and the Rays get another quality veteran for pennies on the dollar.