Dioner Navarro was one of the Rays best players in 2008. After an up and down 2007, Navi had somewhat of a breakout season in '08. He put up career highs in all his slash line categories and was named to the American League All-Star team. At age 25, he's one of not only the Rays bright stars, but a rising star in the American League. Navi is also one of the players we've covered the most this offseason here. We've gotten to know Navi quite well as you can see here, here, here and here,  but now we bring Dioner Navarro to DRaysBay.

After the jump you'll find our interview with Navi which he was nice enough to grant us. On behalf of the DRaysBay staff, I'd like to thank Dioner for the chat. Enjoy...

DRB: First off we've gotten to know you over the past 2+ seasons with the Rays. Tell us something about Dioner Navarro that we don't know. A favorite hobby? Secret Talent?

DRB: We know you've overcome adversity in your personal life and have many proud moments there, but what is your proudest moment on the baseball diamond?

Navi: Winning that seventh game against Boston in Tropicana Field to get to the World Series last season.  That was a really special moment. I was so proud of my teammates and so excited to be able to play in the World Series. I can't wait to do it again.

DRB: There were many memorable moments for the team last season, what was your favorite and why?

Navi: Besides the playoffs and World Series, walking out on the field at Yankee Stadium with Scott Kazmir and Evan Longoria to represent the Rays in the All Star Game. I will never forget what that felt like. I hope I earn the right to do it again and again.

DRB: David Price is one of the best young talents in the game, and every Rays fan is excited to see what he can do in 2009.  Seeing as how you have experience in catching young pitchers, can you tell us what Price does that separates him from the pack?

Navi: Price is really good. He throws so hard and is so big that the ball comes in at a different angle.  Being a lefty and throwing 97 is hard to beat. He has the stuff to be one of the best starters in the Major Leagues. And he is only going to get better.

DRB: Can you tell us a little bit about how your pitchers prepare for a game? For instance we know Matt Garza is a detailed note taker, even compiling a notebook of hitter tendencies, are they all like this? Or are there some guys who just like to be left alone and just pitch?

Navi: We all have different ways we prepare. I like to go over the game plan and the hitters.  You can never be too prepared. But a lot of it comes from experience and reacting during the game. I am only 25, but I have been catching in the major leagues for four years, and been a starter for the last 3 ½ years first with the Dodgers, and then here. I have learned a lot, and try to learn from everyone I play with, and the people who coach and manage me.  It is also good having a former catcher like Joe Maddon as my manager. Joe is a great manager and understands the game so well.

DRB: Do you study umpire tendencies, or does Jim Hickey address whether the umpire will have a large/small zone prior to the match-up?

Navi: I have been in the big leagues since 2005, so I know most of the umpires. They are really good guys, and I like to talk to them during games. Sometimes we have funny conversations.  And yes, I know that some of them tend to call the strike zone a little different than others. We all talk about that. It also helps me when I am hitting.  And I try to set up behind the plate based on that for certain pitches.  It is all part of playing smart.

DRB:  Do you think it's important for a young pitching staff like the Rays have to work with a young catcher like yourself and grow together?

Navi: It is great to get experience together. We have all been through a lot already, and it has been great.  Even when we were losing, we all knew we had something special, but we just needed time to develop. Now, we all feel like veterans.  We have the best young pitching staff in the game, and it is great to be able to catch those guys. Every one of our starters gives us a chance to win every time, and everyone in our bullpen can hold or close a game.

DRB:  In 2006 and 2007 you had a veteran backup in Josh Paul. However, in 2008 you had a less experienced Shawn Riggans behind you. Do you feel that was a sign the Rays were "handing you the keys to the car?"

Navi: Riggans is a great friend of mine, and a really good catcher.  I think that the team kept him because he is really good, and can swing the bat too. He and I talk all the time and help each other. And when you get beat up all the time like all catchers do, it is good to have someone good like him to step in and let me recover every now and then.

DRB: What was the best part about being named to the All-Star team? How special was it because it was in Yankee Stadium, the home of the team that originally signed you and let you go?

Navi: The best part was knowing that Terry Francona, the manager of the team we were battling for the division title with, picked me over all the other great catchers in the AL. That was really special. And playing in the Bronx and Yankee Stadium, where I started my major league career and where my wife Sherley grew up, really meant a lot to us both.  I always loved playing in Yankee Stadium, and I will miss it with the new stadium there. And the New York fans remember me and usually have nice things to say. During the All Star Game parade in New York City, a few of the Yankees fan were yelling to me that they wanted me back, which was funny.

DRB: You improved drastically at the plate last year. Was that a result of more big league ABs or did you change your approach in any way?

Navi: I don't think my approach changed much. When I was with the Dodgers, I  hit around .280, and then I had that tough first half of 2007, but I finished the second half of 2007 strong with a batting average over .280 and a .475 slugging percentage.  So I don't think I changed that much, I think people just noticed it because we were winning and because I was lucky enough to be at bat at the right time a lot to get some big hits. I led the team in hitting with runners in scoring position and with runners in scoring position and two outs last year.  So, I was up at the right place and the right time a lot.  I think that made people notice me more. But if you look at my career, other than that one half of 2007, I have been a pretty consistent hitter all along.

DRB:  What are you most looking forward to in the coming season, from both an individual and team perspective?

Navi: As a team, we want to get back to the World Series and to win it.  We have all worked hard during the off season and are ready for the challenge. We play in the toughest division in baseball, and everyone in our division got better during the off season.  But we are ready to give it our best shot.  As for me, I want to go out there every day and play my hardest, like I always do. Focus on defense.  Last year, I was second in Gold Glove voting in the American League and I was second in the AL in throwing out base stealers, and I want to get even better defensively. On the offensive side, I want to continue to get big hits, and to have quality at bats. I want to do whatever I can each time I go to the plate to help the team win.

Again, thanks to Dioner and to his agent Kendall Almerico for helping me arrange the chat. I'd also like to pass along a note from Almerico who said the Rays handled the arbitration case with class and "the door is always open to talk about a long term deal, if the team is interested in doing so." 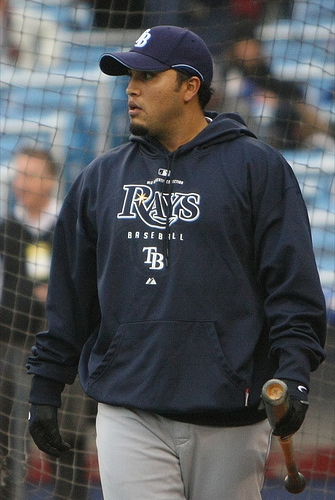