Okay, so Pat Burrell will likely play the outfield on Saturday.* We should probably be freaking out, right? Obviously, it's only spring training, but there's a bigger lesson to be learned: prohibiting exposure is less likely than limiting exposure.

*Actually there's going to be a DH, but the main point stands regardless.

What I mean is, odds are Pat Burrell will see the outfield a few times this season. All things being perfect you would like to avoid these occurrences, but all things are not perfect, and Joe Maddon is likely going to give Burrell the chance to mosey in the outfield every so often. For instance, if Maddon's Sunday lineup involves Carl Crawford designated hitting to keep his legs fresh that means either Crawford or Burrell is effectively out of the lineup in favor of the other Gabe or Burrell will have to play left.

Here's the good news: limited exposure is not going to cost the Rays wins 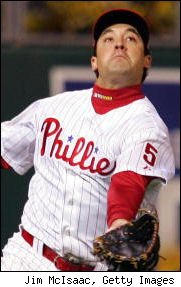 Over the last three seasons Burrell has spent a little over 3,210 innings in left and (per UZR) has been worth -33 runs. That's about -0.01 runs per inning or -0.09 runs per nine innings. That means Burrell has to play 100 innings in left to cost the Rays a full run. That's ~12 full games plus some, and I would assume Maddon would pull Burrell late for a defensive replacement, so we're talking closer to 15 games in left per negative run.

The Rays have a little more than 20 Sunday games and a handful of interleague games where Burrell might strand to the grass. The highlights from those games might be hideous, but the actual contribution doesn't figure to be quite that bad.