A Comprehensive Look at Jeff Niemann

Share All sharing options for: A Comprehensive Look at Jeff Niemann

Last season Jeff Niemann finally broke into the majors. Niemann would start two games before heading back to Durham. He would return the team in September as a reliever and finished with 136 pitches as a starter and 101 as a reliever. Let's see how Niemann differed in the two roles. 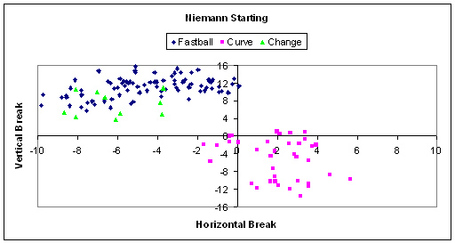 Here's Niemann's velocity and average location as a starter: 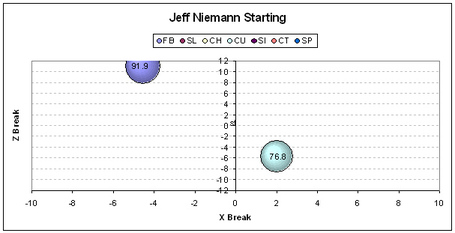 Well enough, how about Niemann the reliever? 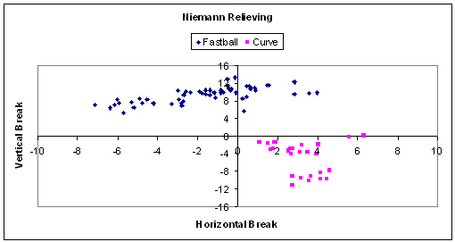 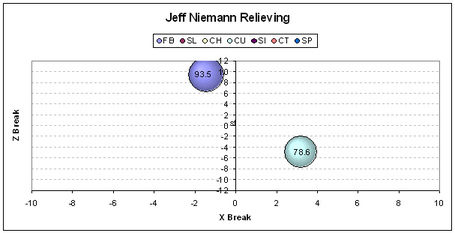 Things that you may have noticed:

1. Niemann's velocity jumped up as a reliever.

2. The average location of his pitches moved towards lefties more as a reliever.

3. Niemann's pitches seemed to be more in a cluster and dare I say consistent.

Here's an overlay comparison of Niemann's starter stuff versus his relieving stuff: 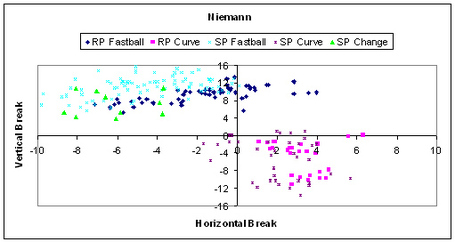 In the key I've labeled which pitches are "SP" or from Niemann's starts and which are "RP" or from relief appearances. It appears our observations were correct. Niemann's fastball was lower and more clustered as a reliever, perhaps by accident. I'm not entirely sure what was going on with the fastballs that broke towards lefties. Experimenting with a new pitch/grip?

How about Niemann's control and ability to throw strikes?

(The following charts measured are in feet, not inches)

The dark box is the normalized strike zone. Some players have taller/shorter strikezones, but this gives you a pretty good idea of control/placement nonetheless. There's a bit too much static here to point out any trends, but I figured people would find it interesting anyways.

To wrap this all up, here's what we learned about Niemann the starter v. Niemann the reliever: