Over the first week (five games) we've seen some good and some bad and that's to be expected. With the WBC giving us an few days of ST, "the real spring" doesn't start until this week. However, when there is a good performance it shouldn't necessarily go unnoticed just because of the date on the calendar.

It's no secret that I am not a card carrying member of the Jason Hammel fan club. That doesn't mean I don't like the guy or want him to do well, I just don't think he's been that good and the numbers back that up. As of right now, I don't think he should be the fifth starter, but he can feel free to pitch lights out and prove me wrong. He took a step in that direction on Sunday.

I was pretty impressed with his outing yesterday. Without the benefit of TV, I had to go on what I heard on the radio and what the box score said. Hammel pitched four shutout innings; allowing three hits, one walk and striking out three. That is a pretty nice start and I especially am pleased with the one walk. In addition to limiting the base on balls, from what I heard on the radio, he got his fair share of swinging strikes which is even more encouraging.

Whether you like Hammel or not, we all want and need him to do well. If he does well and EARNS the fifth starter spot that means he pitched well enough to delay David Price and hold off Jeff Niemann, Wade Davis, Carlos Hernandez and Mitch Talbot. Accomplishing that would take some pretty damn good pitching and I welcome good pitching by anybody.  Even if he does well and doesn't earn the job, he will certainly be an attractive option for other teams, which again is good for the Rays. The worst case scenario for both parties would be for Hammel to bomb out, get DFA'd and be picked up for nothing. While the latter seems a more likely scenario than other options, it doesn't mean it will happen. Again, it's too early to put much stock in what Hammel did on March 1st, but if he continues to pitch like he did yesterday, then maybe, just maybe it will be remembered as the start of something good. 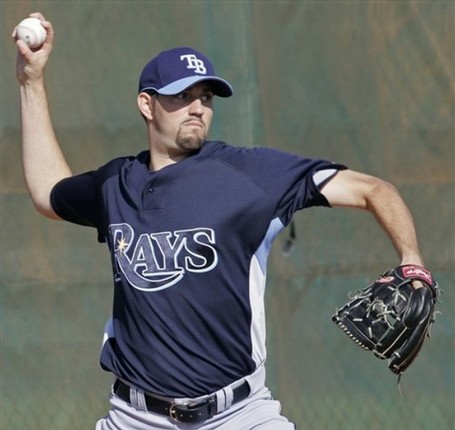