Carlos Pena has only been a member of the Rays for two seasons, but during those two seasons has collected an abundance of hits that can be categorized as "late-game heroics" or "being clutch" in general. Unfortunately, it seems as if people actually feel Pena was more clutch in 2007 than 2008, and that's simply untrue. Not only was Pena statistically unclutch in 2007 (to the point of a negative number) but he was quite clutch in 2008. Either way, I recently did a piece on Moises Alou's top five games (as ranked by context-based Win Probability Added) and I figured it would be a fun exercise for Pena as well.

It wouldn't be a list of big-time games for Pena without a few Red Sox entries. In the first inning Pena would be hit in the wrist by a Justin Masterson pitch that would cost him three weeks with a fractured index finger. You couldn't tell Pena was hurt based on the game he had though. In his second at-bat, with the Rays down 2-1 and B.J. Upton on second, Pena drove a ball to right field that bounced into the stands for a ground-rule double. A few innings later, with Upton again on and the Rays again trailing by a run, Pena would take the sixth pitch of the at-bat to deep right for a homerun. Pena would get one more at-bat and groundout, but for a guy with a broken finger, it was quite the impressive game.

Pena's first at-bat ended in a groundout and his second in a double to right field. His third at-bat gave the Rays their second run of the game - although it came on an error - but it was Pena's fifth at-bat that really meant something. With the Rays up 3-2 in the top of the 9th and facing Leo Nunez, Pena would see Evan Longoria walk, putting a runner on with two outs. Pena would fall behind 1-2and foul off an additional pitch before rocketing a Nunez pitch into the right field bleachers and giving the Rays a three run lead. The homer pushed the Rays win expectancy from 81% to 96% and looked even more important in retrospect as Troy Percival's ninth inning consisted of a flyball to deep center, a short flyout to right, a homerun by Ross Gload, and a another flyout to right-center.

Pena's day was quiet until the to of the 14th inning. In a 1-1 deadlock the Rays would put two on with only one person out against Mike Timlin. By now, I'm sure everyone knows what's coming, but on the second pitch of the at-bat Pena would stroke one well over the Green Monster, giving the Rays the lead in dramatic fashion and allowing Troy Percival the chance to push the Sox three and a half games back. Percival would enter, promptly allow a double to Jacoby Ellsbury, a walk to Dustin Pedroia, and a walk to David Ortiz before Jason Hammel was called upon to save the day. Six pitches later Kevin Youkilis flied out, five more later Hammel struck out Jason Bay, and three more pitches later, Alex Cora hit a ball to B.J. Upton, ending the game and the near nightmare.

The lone entry from 2007, many may remember this as one of the games in which Al Reyes exploded. With the Rays trailing 0-3 in the bottom of the fourth, Daisuke Matsuzaka served up a pitch to Pena that wound up in the right field bleachers, making it a 3-1 game. Delmon Young and Greg Norton would combine for another run, putting the Rays within striking distance of the Sox. A J.D. Drew two-run shot pushed the Boston lead to 5-2, but the Rays would again cut the lead down thanks to another Norton single. Entering the bottom of the 7th Matsuzaka quickly dispatched of Dioner Navarro and Josh Wilson on four pitches. Akinori Iwamura would walk, as would Jorge Velandia, and Javier Lopez would enter the game to face Pena with the tying run on first. Eight pitches later Pena would give the Rays the lead, hitting another ball to deep right, his second homerun of the day. Reyes would enter in the 9th with a 6-5 lead and surrender homeruns to Jason Varitek and Julio Lugo as the Rays wound up losing 8-6. 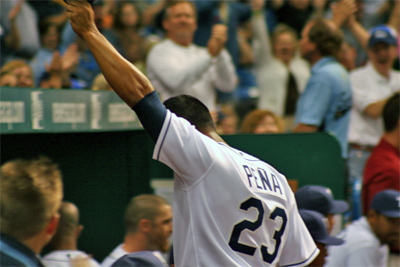 It's difficult to remember, but at the time of this game the Rays were 5-5 and one game behind the division leading Baltimore Orioles. James Shields had a rough day - six innings, seven hits, five runs - only two earned - and actually had a negative WPA. Thankfully for the Rays, Carlos Pena was there to bail everyone out. In the first, own 3-0, Pena hit a two-run homer, putting the Rays within one early. In the 7th, with the Orioles holding onto a 5-2 lead and the tying run represented by Pena, the Orioles would bring in LOOGY Jamie Walker. Pena would take the fifth pitch of the at-bat and promptly state "LOOGY this." As the ball sailed out of the playing field, giving the Rays a tie. An inning later, Dennis Sarfate would allow a single and two consecutive walks before faing Pena, and promptly walking him on seven pitches, giving the Rays the lead. B.J. Upton, Eric Hinske, and Shawn Riggans would add toe the damage, and the Rays would win 10-5, taking a share of the division crown early on.