Erik Manning at Beyond the Boxscore is doing a fascinating series on farm system values using Victor Wang's research on prospect worth. Erik was kind enough to give me a helping hand with his method, but rather than butcher it, I'll allow you to read more about it here. I also didn't want to provide too much information about the other American League East farm systems and ruin Erik's upcoming piece on the topic.

That means we're going to keep it Rayscentric.

The values for prospects* are as follows:

You'll notice that 11-50 pitchers are worth more than 1-10. Well, given the sample size, I suppose some oddities are to be expected. Plus, Wang himself didn't have too many top 10 pitchers to deal with. Let's get to the results though.

*These are decided based on Baseball America's 2009 top 100 list as well as John Sickels individual team analysis -- as published on his site.

The Rays system has an estimated value of 111.87 million. League average is roughly 93 million and without giving too much away, the Rays rank second in the division and sixth overall. That is to say, even with the graduation of Evan Longoria and some potentially questionable ratings by Baseball America and John Sickels, the Rays still have one of the best systems in the league. Just not quite what we had before. 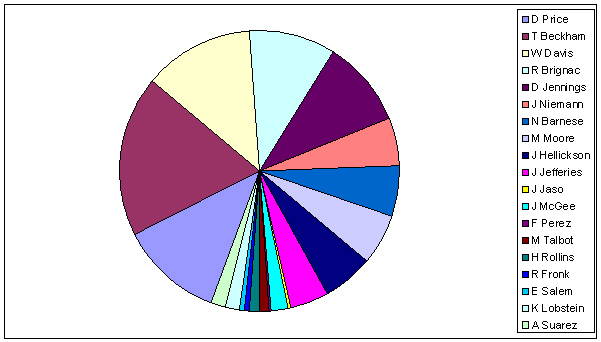 Above you'll see the breakdown of the Rays value. Again, it's a bit odd thinking Tim Beckham, Reid Brignac, and Wade Davis hold more value then David Price, but that's what the data Wang had to work with indicated. The analysis is also not saying that Beckham or any of the prospects is a guarantee, instead it's just a pretty unique way of looking at farm system value.

The most interesting thing this analysis gives us is that the Rays are indeed still pretty well off in terms of top tier talent. Beckham and Price combined for roughly 30% of the total value and Brignac, Wade Davis, and Desmond Jennings combine for another 30%. One of the ongoing storylines to follow as the Rays move from perennial cellar dwellers to common contenders is the ability of the front office to maintain a worthwhile farm system.

Adding high-potential arms like Nick Barnese and Matthew Moore is certainly helping to fend away some of the worries for now, but it's going to be an entirely new ballgame drafting in the late 20's and 30's rather than drafting in the top 10.