Share All sharing options for: Feeling The Heat: More on Matt Garza's Fastball

Recently, Roger Mooney of the Bradenton Herald wrote an article about Matt Garza's confidence in his fastball. It seems somewhere on the trip between Minnesota and St. Petersburg, Garza lost confidence in the pitch. However, once he got to the Rays, he was encouraged to throw it more and BOOM went the dynamite. The fastball confidence came back along with success and the ALCS MVP award.

Here is quote from Garza:

"When I finally got that confidence back in the fastball, that's when I think I really took off, because I would just throw my fastball and not worry about throwing any other pitch."

Basically, Garza got so confident in the heater that he decided to throw it 72% of the time. If you're not into percentages and want the raw numbers here you go. Garza threw 5,292.00 pitches in 2008. 3,820.82 were good old fashion; put one finger down and fire, fastballs. This sounds like an extreme amount, especially for a starting pitcher. It's one thing if Grant Balfour, a one inning reliever, goes out there and throws nine out of his 10 pitches for fastballs, but conventional wisdom would suggest that a starting pitcher would need to get more of his secondary pitches involved. For most pitchers this is the case, but the numbers suggest for a hand full of pitchers a heavy fastball diet is perfectly okay.

Here are some numbers from 2007. On this list are all the starting pitchers who threw at least 180 innings with at least 70% of their pitches being fastballs.

You'll notice that for the most part these pitchers were able to sustain a very nice sub four FIP, however three of them did not. So what was the difference between them and the others? Once I took a look at the individual seasons the answer was pretty simple...homeruns. Of the eight names listed above, five of them had HR/9 under 0.70 while the other three had a rate greater than that. It's no surprise that the only three pitchers to have FIP's over four were also the same three who had given up home runs at a faster rate.

This brings us to 2008. Using the same data, which is all the starting pitchers who threw at least 180 innings with at least 70% of their pitches being fastballs, I came up with this list.

Again, the majority of the 70+ club had sub four FIP's. In the case of Cliff Lee, he was a sub three FIP pitcher and won the AL Cy Young. However, like before, there are a few pitchers that weren't able to get their FIP's under four and one of them happened to be Matt Garza. Scanning the individual cases once again, I noticed the same trend. Garza and Aaron Harang both had HR/9 greater than 0.90. For Harang, his HR/9 was an abysmal 1.71 which is why his FIP was closer to five than four.

The key for Garza will be command of the fastball. If you look at the lists you'll see Brandon Webb is the only pitcher to be on both. You'll also recognize that Webb is one of the best pitchers in baseball. This is because Webb limits the long ball with his ability to keep the ball low in the strike zone. Going forward for Garza this is the key.

I've talked to people familiar with Garza's stuff and they've told me that when Garza is at his best, his fastball sinks and is so "heavy" that the batter almost feels like he's hitting a "bowling ball". Now I'm not a professional hitter, but I don't think there are many people who feel like they can hit a home run off a bowling ball. The determining factors will be maintaining 2008's confidence and improving command of the pitch. If this is the case, it would seem very likely that Matt Garza can continue or even improve on his success regardless of the fact that he's throwing roughly three-fourths of his pitches for fastballs. 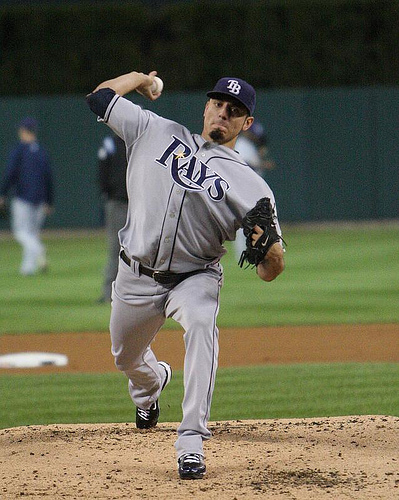