Share All sharing options for: Spring Training Needs to End

With solid starters at each infield position and no interest in trying Aybar in rightfield, Maddon wouldn't appear to have many options.

And two other interesting notes:

Among other potential improvements, the Rays have asked HOK to look at the possibility of a retractable roof at Tropicana Field, with a report, and cost estimate, due by late April. Looks like the Rays will reach their goal of 1 million tickets sold by opening day, a "good start," team president Matt Silverman said, to where they hope to be, which likely is above 2 million

1 million by opening day is fantastic. Here's a graphical look, but the Rays are going to torch 2003's total attendance, and quickly: 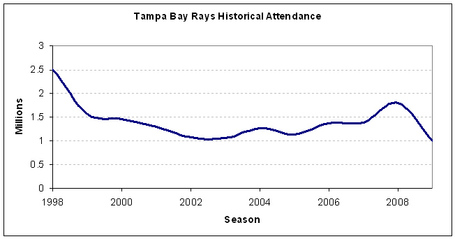