Borchering is a high school third baseman who very well could escalate up the draft boards as we approach June. Borchering came to my attention when Kiley McDaniel -- whoever the hell that is -- wrote about him last year. Here's what he had to say:

Borchering’s swing isn’t without flaws, but he’s on fire and has a lot of things going for him. One scouting service has the 6′4 switch-hitting 3B from Ft. Myers’ Bishop Verot High as one of the top 15 prep juniors in a deep Florida crop and top 50 in the country, and he’s certainly improved upon that status, moving into the elite category. He pitched on Wednesday and works in the mid-to-upper 80s as a pitcher with a clean arm, strong command, and solid breaking ball. He’s committed to the University of Florida, but I bet his prowess as a hitter will shoot him up draft charts and he’ll have a big dollar figure in front of him next June to make him think about it.

So yeah, there's an extremely strong chance Borchering is taken before the Rays ever get a shot at taking him, but -- and this is the fun part about picking so late in the first round -- there's also a chance that signability issues can cause him to slip. 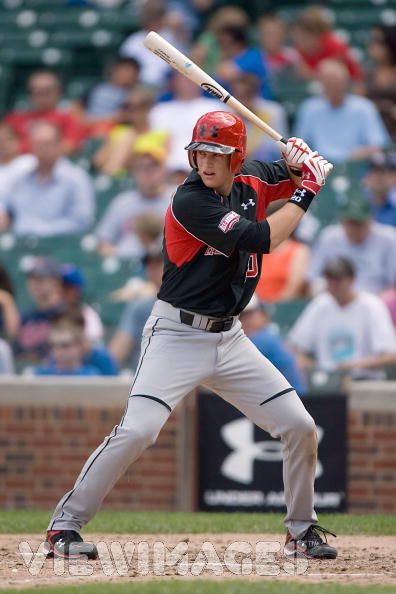 Borchering is well-known for his hitting prowess on the showcase and travel team circuits and is a projectable 6′4 switch-hitting third baseman with serious power and a chance to stay at the hot corner. He’s still one of the top 5 juniors in the state for me and a potential top-two round pick in 2009. You’ll be seeing him on the 2009 Draft prospects list as well.

Current predictions would have him somewhere in the 20-25 range, although again, there is a distinct possibility he can either climb the charts in a weak draft class or slide a bit with demands.

As far as actual ability, the image on the top shows his size and stance. The chief concern seems to be his ability to stick at third, but that's not because of a weak arm, rather a growing frame and potentially lackluster range. If Borchering can remain at third that obviously raises his value, though if he has to play first he still should hit well enough to be valuable. You may recall my reservations about Tim Beckham's weight transfer and heavy reliance on his upper body, if not here's the gif again:

Yeah, well here's a video of Borchering's swing. A bit cleaner, no? Beckham's gif is from his junior season I believe, and that swing looks awful, but he does have the things you can't fix, like batspeed. Borchering had a similar issue with weight transfer but made an adjustment prior to the video.

Oh, and did I mention I have two more videos?

Coincidentally, that homerun was his first at-bat following the adjustment.

He's ~6'4" and around 190 pounds, so you can understand why people project some weight gain as Borchering matures.

We'll cover another potential draftee next week, but here's a direct link to the tag archive.