Not a Banner Game for David Price

Share All sharing options for: Not a Banner Game for David Price 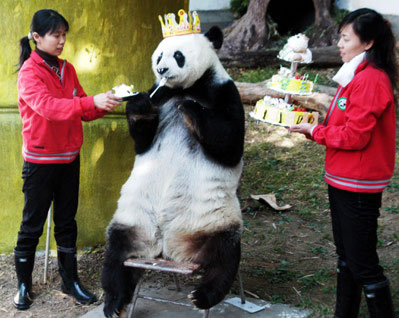 Normally David Price and Andy Sonnanstine combined to make me feel like the panda. That panda is happy. That means they made me happy since they usually pitch well. I guess you could call that panda a happy panda, but damn he looks too smug already, no reason to build his ego up anymore.

Well, I was half way to being that happy panda tonight.

Sonny went three and looked about as well as you can hope while working on his change.  Spotting his pitches well enough and avoiding any walks or homeruns. Everyone's most anticipated lefty entered the game next, that's right, Brian Shouse. Unfortunately, Shouse faced a few righties and allowed a few runs, but the Rays would eventually get those runs and some more back during a rather long 6th inning.

Price was...well, he wasn't overly impressive. I'm not sure I can recall him throwing a change-up. Instead Price attacked with mostly fastballs and some poorly commanded sliders. Price walked a pair and struck three out, but seemingly had an off night. This seems like an outing that the Rays can point to and pinpoint as an example of how Price still has some development to undergo.

Don't read too much into it either way though.

I guess I do still feel like that panda, at least once he realized the birthday cake is not out of sincerity, but simply a gimmick. A cold, hard, delicious gimmick.