Share All sharing options for: The Matt Joyce/Jeromy Burnitz Comparison

Ever since the Rays acquired Matt Joyce from the Tigers for Edwin Jackson, analysis and fans alike have wondered what to expect from him.; soon we will start to find out. Matt Joyce made his Rays' debut today as a DH in a minor league game. Joyce has missed most of the Rays workouts, and all of their spring training games, due to tendinitis in his leg. So far, all we have to base our opinions on is a half year of above average play in the major leagues. However, we can compare Joyce to anther player who had similar starts to their major league career. That player is Jeromy Burnitz.

Like Joyce, Burnitz is/was a left handed corner outfielder. Also like Joyce, his rookie season was basically half of a full season. In 1993, he played in 86 games for the New York Mets and racked up 307 plate appearances. Joyce played in more games (92), but had slightly fewer PAs(277). Here's a look at some of the similar stats.

Pretty close across the board. Their OBP's are identical, but Joyce showed slightly more overall power.  Joyce also showed more raw power as he finished his rookie year with an ISO of .240, while Burnitz finished with .232. The pair also showed very similar plate disciplines.

Burnitz had the knock as a high strikeout guy, but he did get his fair share of walks. He finished his career with a career K/BB of .54 which is the same as Frank Thomas. The one difference I noticed was in their splits. First we'll look at them versus right handed pitchers.

Joyce again separates himself from Burnitz in the power category. Now vs left handed pitchers.

On both accounts you can sound the *small sample size* alarms, but Burnitz was the better hitter vs. south paws. Over his career, he would own an .849 OPS vs. RHP and a .761 vs. LHP. If Joyce were to be a .761 OPS hitter vs. LHP, I think a lot of us would gladly take that. 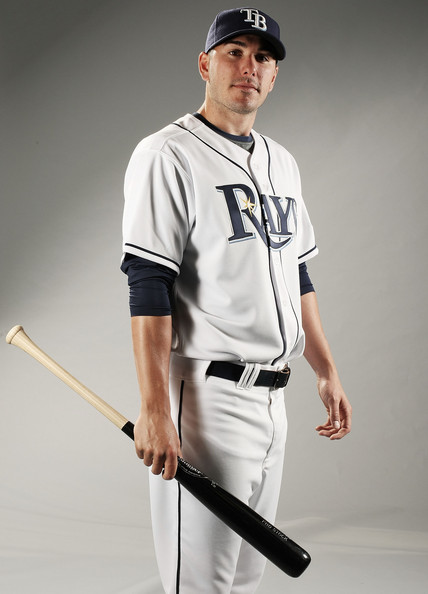 As far as we can measure defensively, Joyce is the superior fielder. This is why ,according to Baseballprojections.com's WAR database, Joyce was worth a 2.2 WAR in his rookie season, while Burnitz was a 1.7 WAR.

Now I know some people are going to see the name Burnitz and immediately say "oh no, not him," but for a five year stretch, he was one of the game's best offensive outfielders. From 1997-2001, he was roughly a 3.2 WAR outfielder. Offensively, he had an average wOBA of .373, average OPS of .879 and an average wRAA of 19.86. For comparison's sake, a wRAA of 19.86 would fall somewhere between Jack Cust and Alfonso Soriano. It's safe to say during his prime he was a very good hitter.

If the Rays can get Jeromy Burnitz's bat with above average outfield skills out of Matt Joyce, then I think we could pencil him in right field for years to come; thus officially ending the curse of Ben Grieve that has lingered in right field for most of the franchise's history.