Tim Beckham is the Man on the Moon

Share All sharing options for: Tim Beckham is the Man on the Moon

People have the tendency to place an overemphasis on n-1 data. Whether "n" stands for last year, last week, last series, yesterday, et cetera. Naturally, people remember yesterday more than two days ago, or last year more than two years ago. Unfortunately, when we only have one data point there's even more reliance placed upon it.

Thus is the case with Tim Beckham. Call him the man on the moon, Beckham's going to be under constant observation from everyone over the next few years. Selected over players like Buster Posey, Pedro Alvarez, Brian Matusz, and Justin Smoak, Beckham is amongst the rawest of any player in the Rays system. Rather than focusing on his statistics, let's look at his spray chart - note the disclaimer, these are estimations rather than exacts.

Given Beckham's swing and lack of weight transfer, he hit a ton of balls on the ground to the left side. Even with a swing in progress Beckham's outstanding bat speed turned a few balls into liners and shots. Those two homeruns stick out, supposedly going further than 350 feet. Also note the green dots around third base, as you should know, Beckham is incredibly fast (6.33 in the 60 yard dash, that about 4.22 over 40 yards -- and no that doesn't mean he would actually run a 4.22 40.), so a few of the hits are simply him acting like a bird on wheels and outrunning the play.

As we head forward into this season, we're looking at a player that... 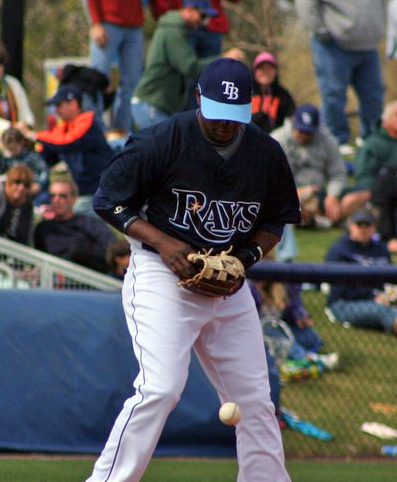 - Plays shortstop, the second most valuable offensive position besides catcher.

- Has a fixable swing.

- Is entering his first season with pro instruction.

Yeah, the numbers from last year look bad, but for now should be no reason of concern. Tim Beckham's shine might not be as polished as Posey's or Alvarez' quite yet, but it has the potential to shine brighter.

Also if you hadn't seen these videos from Josh Kalk yet, they might be of interest to you.