Share All sharing options for: More On Fastballs, Sliders and David Price

Over the course of the past two weeks we've really been keying in on David Price and pitch usage. The basic questions are: Can David Price be a successful starting pitcher right now with just two pitches? Does he really need to go to Durham and work on a third offering?

I searched the starting pitchers in 2008 with a minimum of 100 innings pitched. I think we can all agree that Price will pitch around 100 innings in the big leagues this season( hopefully more), but I wanted to set the bar a little low just incase. I then narrowed down the field a bit by pitch usage. Going off Price's limited 2008 numbers, I looked for pitchers who threw around 60% fastball and over 20% sliders. Finally, I eliminated any pitcher who threw a third offering over 10% of the time. Here are the names left:

It's not quite the who's who of starting pitching, but there is some promise. Of course, I don't think any of us would like to see Price put up numbers similar to Kendrick, Harang, Jackson or Perez, but Santana and Lowe give us some hope. Here are the key stats of the players on the list.

As you can see, most of these guys are average starters at best. We really don't want Price to be average, at least I sure don't. Ervin Santana and Derek Lowe seem to be the outliers. Like Price, both pitchers were over 60% fastball and 30% slider and both were well above average pitchers. However, they weren't as FB/Slider heavy as Price was in limited action. Lowe mixes in a change up about 7% of the time. However, as a sinker baller, he is a different pitcher and his velocity is much lower than Price's.

Santana is an interesting case. His fastball velocity is around 94 MPH, which is similar to Price. However, his slider is about three miles per hour slower and stays around 84mph. One thing I did notice about Santana is that he just recently became a two pitch starter in 2008. In 2006 and 2007, he threw a curveball around 8% of the time and featured his changeup a bit more. In 2008, the curveball almost disappeared as he threw it around 1% of the time and the changeup was only used about 4%. The change in usage worked very well for Santana as his ERA and FIP both dropped by over two runs. He also saw a rise in swinging strikes from 6.8% in '07 to 10.7% in 08. Of course this increased his K/9, while lowering his BB/9, conversely raising his K/BB rate to a wonderful 4.55. It will be interesting to see if he can sustain the success he had in 2008 with his new approach to pitch selection, provided that his elbow is 100% healthy.

According to this quick research project, with the stuff Price has, he can most likely be your average fourth of fifth starter right now as a two trick pony. But again, who amongst us really wants Price to be just average? Is there a chance that he can be a really good starter with just the two pitches? Yes, but the odds of that happening aren't that great. So once again, if the Rays feel that he needs more time to fill out his repertoire, it's probably the best case for all parties involved. 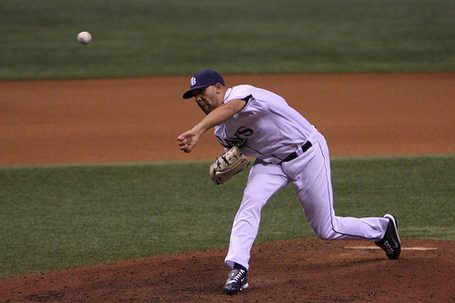