The Rays and Marlins: Attendance Trends over Time

Share All sharing options for: The Rays and Marlins: Attendance Trends over Time

When looking at some historical attendance data, I couldn't help but be surprised by the similarities between how the Rays and the Marlins have drawn over the years.  Take a look at this: 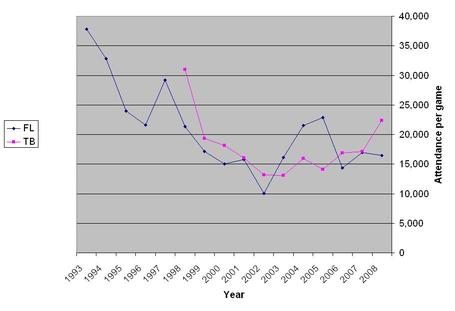 That's right, for the years that the Rays and Marlins have both been in existence, the Rays have outdrawn the Marlins for 8 out of 11 years.  And despite the Marlins' peak in 2004 and 2005, the Rays still have a higher average attendance over that time period: 17,913 per game to 17,054.  Given that the Marlins won the World Series in both 1997 and 2003, plus all the negative press dedicated to the Rays' poor attendance figures, I couldn't help but ask the obvious question: why?

To begin with, when looking at a club's attendance history over time, there are a couple key variables that contribute to how well a team grosses: length of existence of the franchise, the population size of the team's fanbase, and both the historical and short-term competitiveness of the franchise.  These variables are not the be-all-and-end-all, but for the most part, they provide a good lens through which to analyze a team's attendance.

So when comparing the Rays' and Marlins' attendance histories, we need to keep these variables in mind.  The Marlins have been around since 1993, five years earlier than the Rays, plus they are located in the largest metropolitan area in all of Florida.  Actually, the Miami metropolitan area is massive, ranking seventh in size (approximately 5.4 million people in 2007) out of the entire nation.  The Rays, on the other hand, are located in the Tampa-St. Pete metropolitan area, which comes in 19th with around 2.7 million residents.  Here's a good visual representation of what this looks like: 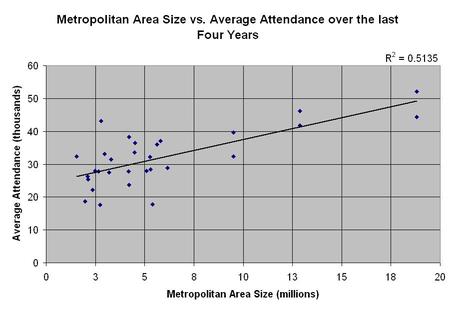 In case you're curious, the three outlier cities are, from right to left, New York, Los Angelos, and Chicago.  This isn't a perfect study since it only goes back four years, but at least from this data, it appears that there is a pretty strong correlation between the size of a city's metropolitan area and average attendance.  The Rays are that dot just above 3 million residents (don't ask me why...Excel is being weird) and just below 20K people per game, while the Marlins are the rather extreme outlier with less than 20K people per game and more than 5 million people in their metropolitan area.  At 17,713 people per game over this time period, they are the only team located in a metropolitan area with more than 5 million residents that failed to gross more than 28K per game.  In fact, they had the lowest average attendance from any team during this time period.  That's not just bad - that's horrendous.

So far, though, we haven't begun to answer any questions.  In fact, all indicators seem to point towards the Marlins having a large fanbase...but they most certainly don't.  This is because of our last two variables: the historical and short-term competitiveness of the franchise.  During their innaugural year, the Marlins drew like a team from a metropolitan area with more than 5 million individuals (averaging almost 38K per game), which is much more than the Rays averaged their innaugural year (~31K per game).  However, since then, the franchise has dedicated no effort towards sustained competitiveness.  Sure, the Marlins won two World Series', but their owners dismantled the teams shortly thereafter.  In return, the area has said, "Screw you, if you don't care about us, why should we care about you?"  And hey, who can blame them?

Okay...so how does this relate to the Rays?  Well, although we don't have the large metropolitan area that would give us the potential to sustain larger attendance figures over long periods of time, our Front Office has dedicated itself to winning not only now, but in the future as well.  With a solid young core that is locked up for a long period of time and with an expanding payroll, the team has showed that it cares about winning.  Looking at past trends, I fully expect the fanbase to recognize this and to jump on board.  Over the course of the next few years, expect our average attendance figures to keep creeping up, reaching up to 30,000 and slightly above (which would put us around average for the size of our metropolitan area).  Attendance could always reach even higher, but it depends how long our team's performance peak lasts.

Anyway, despite our history, lack of a new stadium, smaller metropolitan area, whatever....we're in much better shape than our friends across the state.  The Marlins could have such an impressive fanbase, but they've squandered that by focusing their energies on keeping a low payroll at all costs and applying pressure on the local government to give them a new stadium.  The Rays, though....I really like the way they're running things.  Things are certainly on the way up in St. Pete.