Carl Crawford To Continue Assault On Record Books in 2009

Share All sharing options for: Carl Crawford To Continue Assault On Record Books in 2009

We all know the Rays broke and set many records in 2008. The record book took a beating both on the team side and individual side. In 2009, you should expect more of the same. Here is a look at some of the milestones we should see in 2009.

All Time Doubles-With tenure and a lot of playing time comes a lot of records. This is why it's no shock that Carl Crawford owns most of the all time records for Rays' hitters. However, there are a few that don't have CC at the top, but should after 2009. Most doubles in franchise history is one of those records.

Under Crawford on most of the records are two names: Fred McGriff and Aubrey Huff. As for doubles, this record is still owned by Huff, at least for a little bit longer. During his time with the Rays, Huff hit 172 doubles. Crawford could've easily had this record by now if he wasn't turning mere doubles into triples. Nonetheless at 157 doubles, it's a safe bet that CC will overtake Huff at some point this season. He only had 12 doubles last year, but missed 53 games and has averaged around 22 doubles a season in his seven year career. 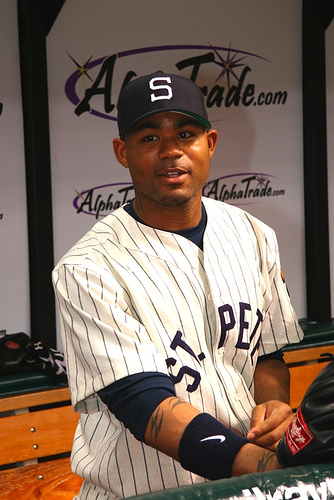 All Time RBI- The Rays haven't had many run producers in team history. For example, Greg Vaughn has the 10th most RBI in team history and right above him in ninth place is John Flaherty. In just two seasons, Carlos Pena has shot up to sixth on the list and will pass Rocco Baldelli and Toby Hall to move into fourth place this year. However, that's not the only passing on the list that will happen.

Again, at the top we have the same three names: Crawford, McGriff and Huff. Like doubles, Huff remains a top the list with 449 RBI. Also like doubles, Crawford needs just 16 RBI to pass Huff as the all time RBI king in Rays' history. If B.J. Upton is named the Rays leadoff hitter, CC should have plenty opportunities early on to knock him in and take this record for his own.

All Time Sac. Flies- This is not the sort of record people brag about, but nonetheless it's a record. Again, over the course of his long tenure with the team, nobody has sacrificed more on the field than Carl Crawford, so it's only fitting that at some point this season he will also be on top of this list.  Currently, the record is shared by Toby Hall and again Huff with 26 sac flies a piece. CC is just one away from tying the record at 25 and two away from putting his name at the top of yet another Rays' hitting record.

Crawford is already  the Rays all time leader in the following categories: 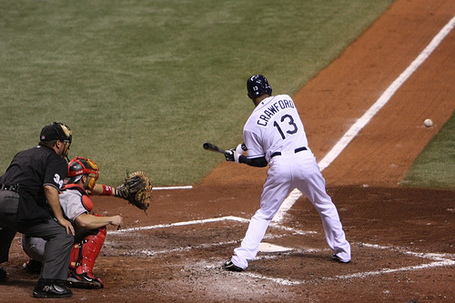 I'll take a look at some of the pitching records soon.