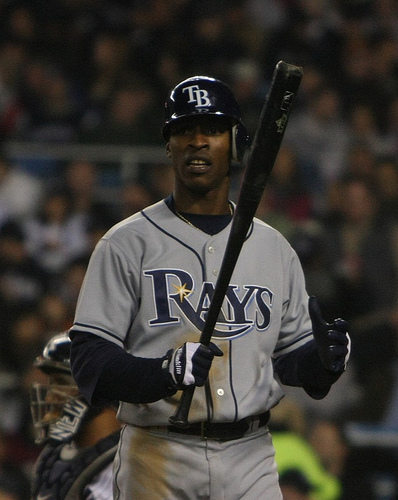 The good news is it still looks like B.J. Upton's hand injury is a minor one. The bad news is it's a big enough setback that Upton is "definitely" expecting to the season on the DL.

Upton now figures he will open the season on the DL with hopes of being ready for the April 13 home opener.

"Definitely,'' Upton said. "Obviously I was pushing it, but I think they're definitely going to want to take it a lot slower now.'' --Heater

While it was a long shot for Upton making the opening day roster to begin with, he was progressing nicely this spring and just last week started to play in minor league games. Saturday was his first game playing both defense and offense. According to the report, Upton's hand is still swollen and will visit with Dr. Koko Eaton today for futher evaluation. B.J. still has hopes of playing in a regular spring training game this week, but we all know the Rays are very cautious with injuries.

The Rays could go a few ways with Upton's roster spot. They could give it to a true outfielder like Justin Ruggiano, who has the ability to play all three spots. Or they may opt to keep a utilty infielder around like Adam Kennedy or Elliot Johnson, who both have also played some outfield this spring. This scenario would depend on how comfortable the team is with Ben Zobrist's ability to back up the outfield.