Following up on something I wrote about yesterday,  the Rays are looking at Ben Zobrist as the potential opening day centerfielder. He could also see the lion's share of innings in center until B.J. Upton returns from hand/shoulder injuries. Zobrist started yesterday in center field and has logged more innings (28) at that position than any other this spring. He has played every position except pitcher and catcher so far. Zobrist, a switch hitter, would allow the Rays' "Gabe of the Day" right field platoon to continue as planned; Gross starting versus right handers and Kapler starting against lefties. Kapler is another option to start in centerfield in Upton's absence. 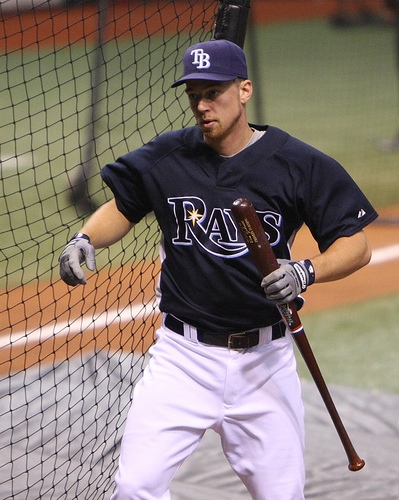 reason Zobrist is being looked at as the temporary centerfielder is roster flexibility. I mentioned this earlier this weekend, but the Rays really have two options here. First, they could keep Justin Ruggiano on the roster and have him be the primary backup in the outfield. Second, they could use Zobrist as the centerfielder and keep Adam Kennedy as a utility infielder along with Willy Aybar. Kennedy has played second base, third base and some outfield this spring. He played 10 games in the outfield and three games at first base for the St. Louis Cardinals last season. We all know Joe Maddon loves a flexible roster so this could be the way he goes.

While Maddon seems comfortable with Zobrist in center field, we just don't know how good or bad of a defender he will be out there. Last year, Benzo logged 113.1 innings in the outfield with most of those coming in left field (79.1). Zobrist looked to be about average in left with a UZR of 0.7 in limited action. He did play five games in center field last year including three starts. He had a -0.7 UZR in 27 innings in center, however, that is a very small sample size. There is a chance Zobrist has made some defensive strides in the outfield this spring, so we'll have to trust the opinions of coaches and scouts for now.

The effect of the Fernando Perez injury is really starting to show right now. None of this would even be necessary had Perez not suffered a dislocated wrist injury along with ligament damage. Perez is expected to miss 4-5 months, meaning a July or August return. However, Andrew Friedman acknowledged the injury could cost Perez the entire season, but it's too early for that type of speculation.