Keystone Question: Akinori Iwamura, Willy Aybar or Someone Else?

Share All sharing options for: Keystone Question: Akinori Iwamura, Willy Aybar or Someone Else?

After last night's World Baseball Classic finale, I was reminded that Akinori Iwamura is the Rays second basement. Up until last night, Iwamura had become some what of a forgotten man around here. Of course we've noticed names like Adam Kennedy and Reid Brignac in his place, but overall nobody has said "Man, we really miss Aki." I'm sure his teammates, most namely Jason M.V. Bartlett, and his coaches have missed him, but otherwise his presence or lack there of, has not been a big story this spring. This got me thinking about who will be the Rays second basemen beyond 2009. 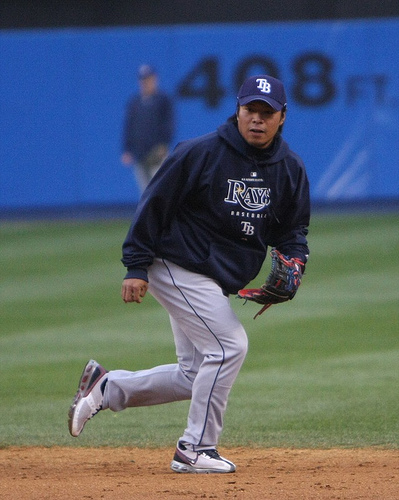 First off, this is all speculation. Akinori Iwamura was a very important part of the 2008 championship run and I really like Aki as a player. He moved from the hot corner to the keystone and made it seem easy. He was rated the best second basemen at turning the double play according to fangraphs DPR (double play runs). Overall, he was worth 2.7 wins and $12 million dollars with a salary of just $2.4 million dollars. With all that being said there are a few variables to look at in this situation besides just production.

Iwamura, who turned 30 last month, is in the "final year" of his contract. He is scheduled to make a base salary of $3.25 million in 2009. There is a club option for 2010 at $4.25 million with an incentive clause that could push it to $5.25 based on plate appearances. It's not known exactly what that number of PAs is, but Iwamura has amassed 1,266 PAs in just two seasons. There is also a clause in Aki's contract that says if the Rays do not extend his contract they must release him, granting him free agency after four years of service. Do the Rays want to pay a 31 year old Iwamura between $4-5 million, when cheaper alternatives are available and ready?

That is the question the Rays will have to answer before picking up or declining the Iwamura's option. Let's take a took at the potential replacements

Willy Aybar- Obviously the most likely replacement is Aybar. Currently he is the primary back up at first, second and third base. He is also regarded by many as the best bench player in baseball. On the surface it would seem that a 27 year-old Aybar at $1.35 million in 2010 would be a much better fit for the Rays than a 31 year-old Iwamura at a minimum of $4.25 million. Offensively Aybar should easily match Iwamura's career .747 OPS, if not exceed it. The real question is if Aybar's solid defense can carry over to second base for a full season. 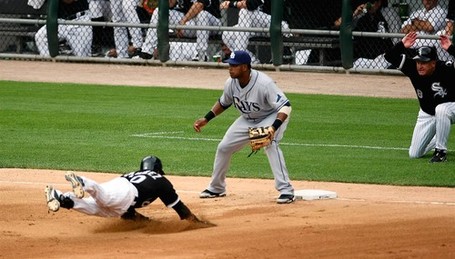 He has limited experience at the postion, however, if you look at the small sample size the answer is yes. In 192 innings at the position, Aybar has a UZR of 1.9. Iwamura had a UZR of 2.0 last year. It's almost dead even, but the sample size for Aybar is just too small to make the assumption that he will be just as good as Iwamura. I am in the camp that feels Aybar can handle the full time job, but there are a few who think he is more like Ty Wigginton than Akinori Iwamura. This will be one of the more intriguing sub plots of the '09 season.

Reid Brignac-There has been much discussion on DRaysBay about the future of Reid Brignac. Some see his ceiling as a Khalil Greene type short stop, which would be above average defense with an average bat. Others see his offensive struggles and say he is destined to be a defensive replacement/utility player. One thing we do know is the Rays have been shifting Brignac over to second base quite a bit this spring. He has played nearly 30 innings at second this spring and it could be a quicker path to the majors for him. With Jason M.V. Bartlett at short stop and under team control for two more seasons, it would seem much easier for Brignac to break through with the big league team at second base. Another interesting move would be Bartlett moving over to second base to make room for Brignac at short. That is pure speculation on my part, but Bartlett's bat as a second basemen could help his overall value.

Others: There are other internal "candidates" like Elliot Johnson or even Ben Zobrist, but in those cases neither should be starting 162 games a season. There really isn't anyone attractive on the free agency list for 2010 at second base. The only scheduled free agent that is younger than Iwamura at the position is Felipe Lopez.  Lopez is not as good of a defender and signed a 1 yr/$3.5 million dollar contract this offseason. If he has a good season, his agent, Scott Boras will probably seek a multi-year deal with a higher base salary. There could also be the cheaper alternatives like Adam Kennedy, who pop up in free agency, but we just don't know.

When the dust settles it looks as if it comes down to Aybar, Brignac or picking up Iwamura's option. Even if Aki maxed out his deal, he should be worth at least $5.25 million in 2010 unless he has a really sharp decline which could happen, but I don't think it will in his case. In my opinion, while I like Iwamura and think he's a fine second basemen, I don't think the gap between Aybar and Iwamura is so great that you would pay one almost $3 million more than the other one. Especially when the team could use that $3 million dollars to address another position.